Healthcare workers across the world are doing all they can to save the lives of their countrymen. From working multiple shifts to having sleepless nights, it’s because of these noble hearts that thousands of patients are walking back home after getting treated from COVID-19. And in the process of providing all the possible medical care, some of them have also lost their lives.

And at this time of crisis, a heartbreaking video of a doctor from Riyadh has surfaced on the internet. In the video, the doctor who just came back home after treating his patients is seen avoiding hugging his kid.

#Watch: Saudi doctor weeps as he follows #socialdistancing advice as #COVID19 crisis continues and refuses to hug his child as he returns home from the hospital pic.twitter.com/KZvQtrOqAy

As soon as the kid sees his father, he runs to hug the doctor identified as Nasser Ali Al Shahrani. But following the social distancing advice, he immediately raises his hands to stop his son from coming too close to him, reports The Indian Express. He then crouches down and breaks into tears. 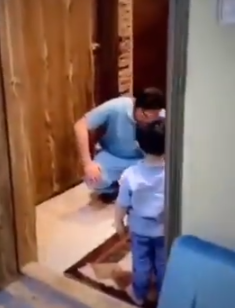 The doctor told reporters that through his act he aims to raise awareness about the highly infectious disease and highlight the situation of healthcare professionals worldwide. Talking about it, he says:

“The clip is aimed to make citizens and residents aware of hazards of the coronavirus and to comply with arrangements and instructions of the Health Ministry.”

In the video, the doctor is seen standing in front of his house in his scrubs and touching his face. Speaking about which he says that all hospital employees leave their protective gloves and face masks in the hospital before leaving.

He also added that before returning home, he usually calls his wife and instructs her to stop their children from meeting him until he’s changed his outfit, sterilised his hands and had a shower.

“All colleagues should avoid approaching their children and families until they wash their hands and take the necessary precautions.”

The upsetting video was shared by people online who said that the doctor was a hero:

I'd like to salute the soldiers in white all around the world. This sacrifice will be remembered, ALWAYS🙏

Dats so heartbreaking to watch really, imagine the heartache he is going thru as a father ☹️

This is my daily dose of torture as well.

God bless him, but it's the right thing to do

Thanks to all healthcare professionals. These are real Heroes

Salam to all front line fighters….

Ufffff its Heart wrenching😭💔😓May Allah bless the fathers of all🙏😢

The doctor may be wrong in touching his face, but…
This is the purest emotional love between the little kid (who does not know much about the seriousness of the issue) and the father (who just realized the seriousness). His only concern at that time, is to safe guard his son.

so heartbreaking! this will end soon

The fear and emotional exhaustion just pour off this man.

This is all medical healthcare workers. They are scared they will give it to family. My brother's wife is a nurse & just in case he visits Mom outside her window.

We can’t thank the healthcare workers enough for their continued efforts and support to save as many lives at possible while risking their own.