This Woman Volunteered Her Body To Be Sliced Into 27,000 Pieces, To Help Medical Students

Have you ever wondered about your own death? Or what kind of legacy you want to leave behind when you go? If you haven’t, here’s some inspiration for you. A woman from Denver donated her body to be frozen, cut up by doctors into 27,000 hair-thin slices and finally digitized for medical purposes.

Don’t believe us? Take a look at this National Geographic story

Susan Potter was a sharp and generous woman

Originally from Germany, Sue later went to New York. Here, she met her husband Harry Potter and tied the knot in 1956. They had two daughters together. By the time she was 73 (in the year 2000), she had been diagnosed with various ailments and was living alone. She thought her end was near when she first read about the University of Colorado’s Human Simulation Project.

She decided to volunteer her body and also record the rest of her life to help medical students. Very proud and excited about her involvement with the project, she requested to see the saw that would eventually slice her. When the doctors worked on her, she wanted classical music in the background and fresh roses in the room. As luck would have it, Sue lived for another 15 years before breathing her last in 2015.

The process of digitization explained 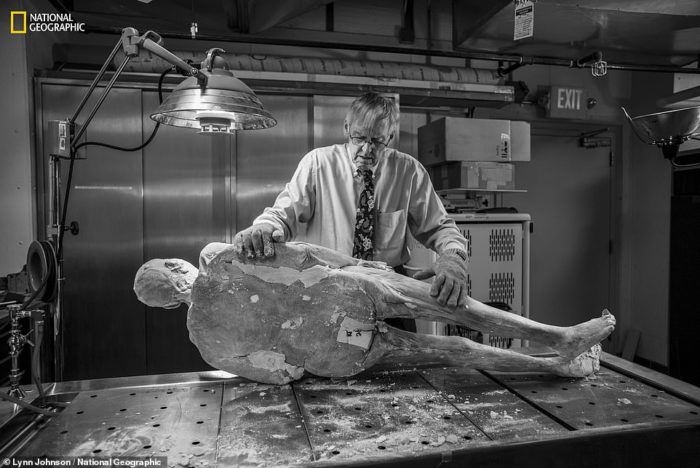 The main aim of the Visible Human Project was to create a digital cadaver. After Sue’s death, the doctors had a 4-hour window in which to start the process. First came the polyvinyl alcohol which embalmed her body, protecting it from freezer burns. Her body was preserved by freezing for 2 years at -15°F. Over the next 60 days, it was sectioned into 63 micron thin slices and photographed in high resolution. It took the team 3 years to computerize each slice and label the anatomy. Now, the ‘immortal corpse’ will be used for medical research and training.

Susan was very happy to be a part of something that would help the future of healthcare. She believed,

And she was right. This contribution will go down in history as being revolutionary. The data collected will usher in a new era of medicine.