In a marketing stunt gone wrong, beer brand Budweiser India commissioned murals of ace footballer Lionel Messi for their brand campaign. But it did so by re-painting some existing, decades-old existing street artwork by art-based organization St+Art India. As per a report in The Statesman, the St+Art India Foundation is a non-profit organization that promotes street art in India. In an Instagram post, the organization criticized Budweiser India for painting over their “earliest murals in Delhi” which included the wall of a primary school as well. “It is unethical for an alcohol brand to advertise on a school wall,” they stated. Check it out:

They also asserted, “This is not art. This is blatant advertising in the name of street art.” In response, Budweiser India took to their Instagram stories to post the following message saying that the brand believed in the “power of art” and that they have worked with multiple artists to “build a strong foundation that is supportive towards the creator community”. 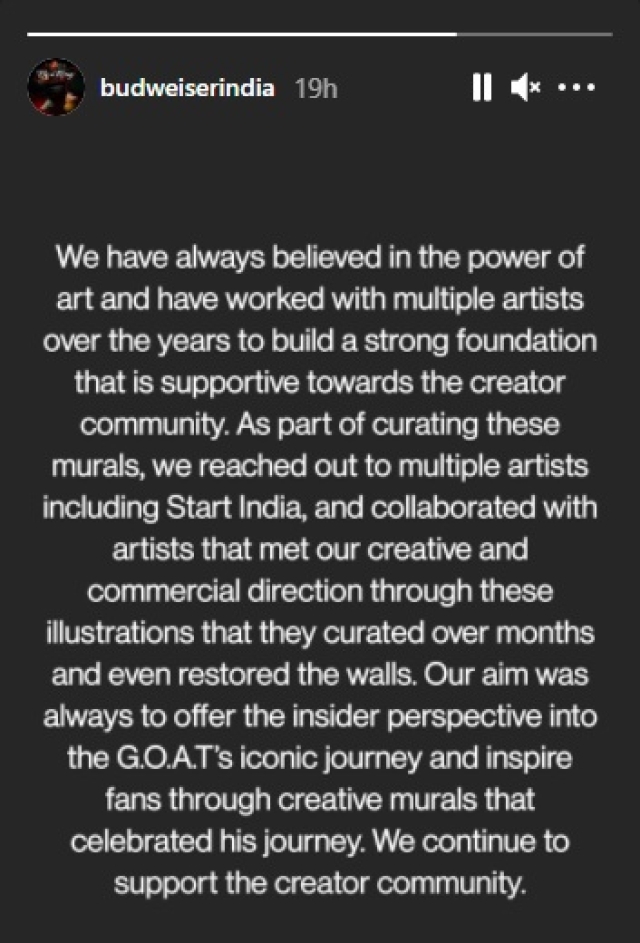 Budweiser India nevertheless faced a lot of heat from enraged creators online for painting Lionel Messi’s murals over iconic street artworks of the Bollywood Art Project which included legends like Madhubala and Sridevi.

The murals of Anarkali and Madhubala got covered by a surrogate ad campaign for Budweiser India, leading to a whole social media row over the weekend. Lots of questions regarding the place of public art in urban centres here. https://t.co/e1yAFRZ7wN pic.twitter.com/5cDtHdYJfF

Hanif Kureshi, who co-founded St+Art India, wrote an open letter to Budweiser criticizing them for “hijacking” decades-old street art and converting them into advertisements.

RJ Rohini Ramnathan also took to Twitter to share a ‘Thread of Rage’ where she shared the story of what went behind creating the old Bollywood street art:

Feb 2018 – #Sridevi passed away. We (fans) were devastated. Sometime in August, I had an idea – #ThankYouSridevi -I called @ranjitdahiya Mural Artist, @BapIndia to suggest this. He said yes instantly. A mural would be painted by her birth anniversary. @ProudSridevians pic.twitter.com/9bFlZz4BDq

Step 2 to CREATING a cultural landmark : DEMOCRACY. We involved fans on social media and radio who sent us images of #Sridevi that @ranjitdahiya could paint on the wall. @BudweiserIndia We didn’t count impressions because we knew that we weren’t selling this to anyone. pic.twitter.com/o7qwnMxHS0

My final word to brands who like @BudweiserIndia think they can CREATE culture : pic.twitter.com/2f4Csgeqz9

As per a report in The Indian Express, the street artists are now fighting back by again painting over the Messi murals. Delhi-based graffiti writer Smog said, “We used to get inspired by looking at these artworks and were very sad when we got to know what happened. So, we all came together to paint and write over the Budweiser murals to reclaim our space back from the corporates.”

Sanjay Sahay, who is the South Delhi Municipal Corporation’s director of press and information, said that Budweiser India did not take permission from the MCD, and that the QR code has been removed and those portions would be repainted.

What’s your take on this scenario? Tell us!