“I Was Raised Without A Religion,” Babil Khan Explains How “Religion Doesn’t Define You”

Recently, Irrfan Khan’s son Babil had opened up about facing discrimination based on his religion. In a series of emotional Instagram stories, he revealed that he had lost friends due to his surname and that he doesn’t wish to be solely judged on the basis of religion. However, a few people trolled Babil for expressing his honest thoughts on social media.

Replying to his trolls, Babil shared a new post saying how people misunderstood his intentions, reports HT. He explained that he was trying to make a point about the cultural mindsets of people.

Babil then went on to apologize to the people he might have hurt while sharing his thoughts. He requested them to see the larger picture that he was trying to paint. He said that India is a country of cultural spirituality and that we shouldn’t let caste or religion divide us.

He even replied to trolls directly and shared the screenshots on his Insta stories. He pointed out the fact that he was raised by a Hindu mom and a Muslim dad. Babil said that he loves all religions. 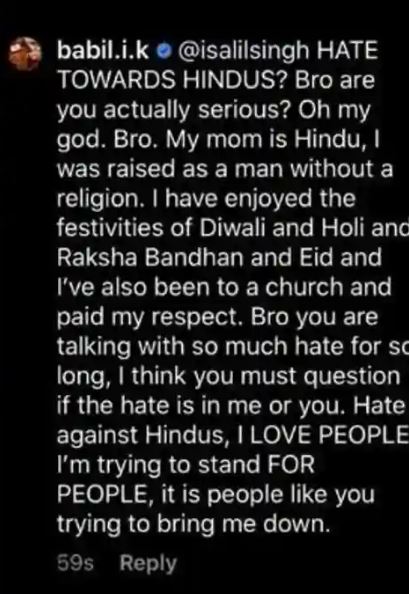 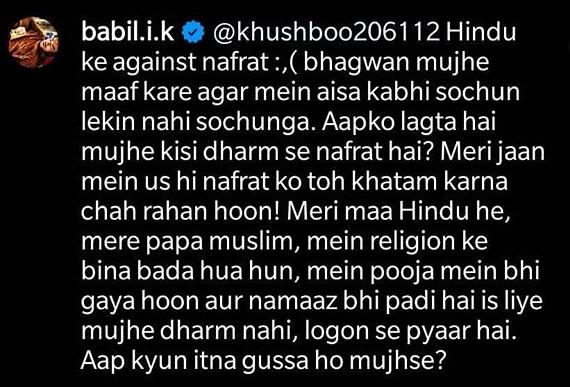 Babil also replied to another person saying that he is trying to bring a positive change by helping those in need amid the pandemic.

He profusely thanked his supporters too:

India celebrates diversity and nobody should be mocked based on their religion. What do you think about Babil’s post? Tell us.