As per a report in HT, Anushka recently took to her Instagram stories to pen a note on how “having a male child is viewed as a privilege” in our society. She debunked this notion and continued further reminding parents about the only “so-called privilege” there is to giving birth to a boy. Check it out: 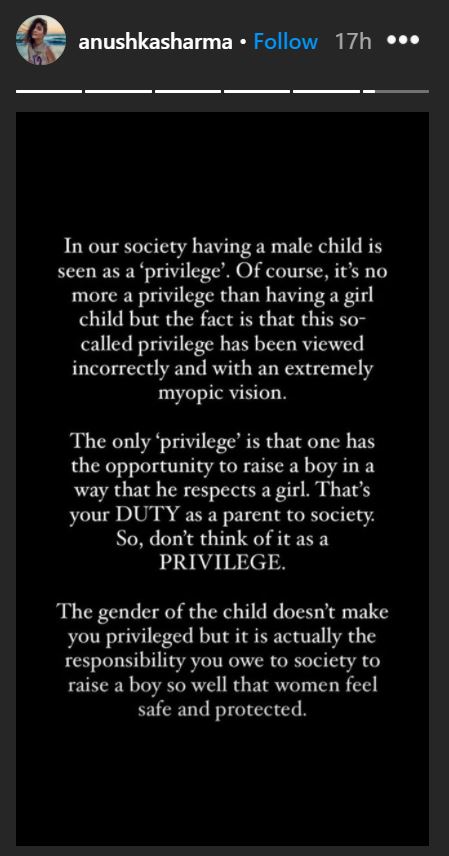 She explained, “Of course, it’s no more privilege than having a girl child but the fact is that this so-called privilege has been viewed incorrectly and with an extremely myopic vision. The only ‘privilege’ is that one has the opportunity to raise a boy in a way that he respects a girl. That’s your DUTY as a parent to society. So, don’t think of it as a PRIVILEGE.”

Nothing is more real & humbling than experiencing creation of life in you . When this is not in your control then really what is ?

She concluded by saying, “The gender of the child doesn’t make you privileged but it is actually the responsibility you owe to society to raise a boy so well that women feel safe and protected.”

"Acknowledging the good that you already have in your life is the foundation for all abundance" – Eckhart Tolle Gratitude to all those who showed me kindness and made me believe in goodness in this world , opening my heart enough to practice the same with the hope to pay it forward 💜 Because … " After all , we are all just walking each other home " – Ram Dass #worldgratitudeday 💫

Previously, she joined other Bollywood celebrities like Akshay Kumar and Kangana Ranaut to demand justice for the gang-rape and murder in Hathras and Balrampur. She posted the following Instagram story on the importance of protecting women in society. Kudos to her for voicing her powerful and hard-hitting opinions. What do you think? Tell us!