Yesterday, an LGBTQ+ activism group on social media called ‘Yes, We Exist’ put up a post wherein they accused Virat Kohli’s chain of restaurants, One8 Commune, of being discriminatory towards the LGBTQ+ community. According to India Today, One8 Commune has branches in Pune, Delhi and Kolkata. The Zomato listings for the restaurant say “stags are not allowed”.

To clarify, the activism group called the Pune branch. They were allegedly told that “entry is allowed only for cisgender heterosexual couples or groups of cisgender women; gay couples or a group of gay men are not allowed; trans women are allowed subject to their clothing.” 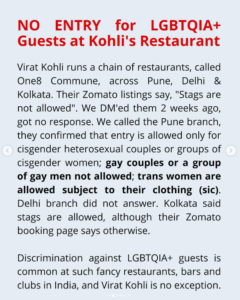 “Stags” are generally referred to as single men. In many restaurants across the country, the entry of heterosexual couples and women are allowed but a group of only men isn’t (citing security reasons). But this becomes confusing when you take people from the LGBTQ+ community into account – what about gay couples? What about trans women?

As this post went viral, it sparked massive controversy online as people slammed the restaurant chain for being queerphobic, regressive, and prejudiced.

Captain @imVkohli has a chain of Resturants and guess what the LGBTQIA+ people are not welcomed.
Queerphobic. pic.twitter.com/st44L0ZMLg

Responding to the allegations, Amit Joshi, Pune branch, One8 Commune, told The Indian Express, “We don’t do any discrimination on the basis of gender.”

From the Delhi Branch, Niharika Kurrar clarified, “Stags are always allowed in our restaurant and we never say no to our guests. We only turn them down when we are completely occupied or the boys are wearing shorts.”

On the other hand, the founder of the activism group ‘Yes, We Exist’ revealed that the restaurant informed him that “trans women are allowed depending on what they are wearing”.

“They are allowed if they are wearing proper female clothes,” the restaurant allegedly said.

Responding to this, Amit Joshi said, “We have a very simple policy that says people who are not wearing proper attire will not be entertained in the restaurant. We don’t allow sandals or floaters. Everybody is expected to wear either smart casuals or smart formals. That’s the only clothing restriction we have.”

One8 Commune also took to Instagram to put out an official statement.

“At One8 Commune, we believe in welcoming all people irrespective of their gender and/or preferences with utmost respect and honour. As our name denotes, we have always been inclusive in serving all communities since our inception,” the statement read.

Restaurants and other such public spaces should have well thought out policies in order to be inclusive of the LGBTQ+ community. Terms like “stags” have become dated and hence, they cannot be used as an umbrella term for a particular sex that has several gender identities. Do you agree?