Remember those relatives or random people asking you ‘what do you want to become when you grow up?’ Although confused, all of us had an answer in our heads. But only a handful of us worked towards fulfilling our childhood dreams. Well, it does feel good to become all you have ever thought you would, but some of us aren’t fortunate enough to live a normal life and achieve all we ever wished for.

Which is why organisations like ‘Make a Wish’ foundation help them make their dreams a reality. In a bid to let these terminally ill kids fulfil their wishes, the foundation collaborated with Bengaluru police. The five kids, Ruthan Kumar, Mohammad Sahib, Sayed Imad, Shravani and Arfath Pasha were given the police commissioner’s uniform and made to play the role for an entire day. 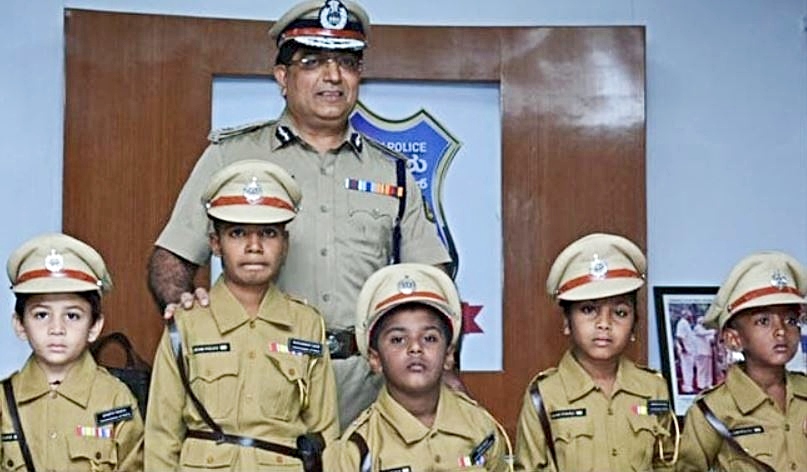 The ‘Make-a-Wish’ team approached the police commissioner when they got to know that the children wanted to visit a police station. “We work with small children who are battling life-threatening diseases. The children’s deepest wish was to become police officers. We are very happy that the police helped us today to fulfil the wishes of the little children,” said Gangadhar from the foundation.

These children are terminally ill patients, who took charge as the @CPBlr city police chiefs in @deepolice12 's presence at his office, wanted to be cops but their diseases may not let them survive for long to realise their dream. pic.twitter.com/Ha85beyFwP

Reportedly, they were also given the customary guard of honour from the police team along with the dog squad before assuming charge as the city’s Commissioner of Police. The kids were handed over the charges of Bengaluru City Police by the Commissioner to encourage them to overcome their critical illness. The kids were also given real guns and handcuffs and were made to sign mock papers too. Bengaluru city Police Commissioner Bhaskar Rao said:

“We were approached by Make a Wish foundation a couple of days ago and got to know that the children wanted to visit a police station. We even gave them real guns and handcuffs, they were really excited.”

Netizens were touched by the cop’s heartwarming gesture:

That’s public service at its best. Keep up the good work. God Bless all of you.

Oh! Very touching gesture. So nice of you.

A very touching gesture by @BlrCityPolice and @CPBlr

Extremely heart warming gesture sir. Im sure the children would be feeling so much better now. Salute to you

Congratulations to the Commissioner of Police Bengaluru city @CPBlr for this fine gesture.

This is such a sweet gesture by Bengaluru police. Hope the kids enjoyed their day as the top cops in the city!