Pole dancing is one of THE MOST difficult art forms there is and I have immense respect for anyone who pursues it! It involves a combination of dance moves and acrobatics centred around a pole and required immense physical strength and balance. Hence, a pole dancer not just needs to train very hard to gain the required core strength but also has to sign up for extremely damaging accidents that might occur while they are up on the pole.

Speaking of which, a professional stripper at a Dallas-based club recently had a horrific accident in which she fell from a 20-feet high pole while she was performing, reports The Indian Express. 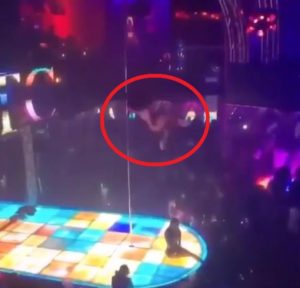 A video captured the terrifying moment in which the woman landed face-first on the stage. However, the woman kept on dancing despite the fall and as Mail Online reported, she kept going despite suffering major injuries.

It was later discovered that her injuries included a broken jaw, sprained ankle, and chipped teeth.

(The videos might be disturbing for a few viewers. Viewer discretion advised.)

this sums up my first str*p club experience, i really do hope she’s ok 😭😭😭😭😭😭😭😭😭 pic.twitter.com/fA4Tu1mePL

People on the internet are shaken by the incident. Many took to the comment section to laud the woman’s spirit and courage for while others wished her a speedy recovery. Have a look:

I just know that face was THROBBIN

Honestly I have so much respect for her to continue

These women deserve to be millionaires

she fractured her jaw AND continued, she is a mfin QUEEN

Holy shit! So glad you're okay!! Keep your head up, girl!!! Xoxo

I’m just imagining the pain she was going through while continuing to dance after that fall. Mehnnnn

Give this girl a promotion

The stripper, Genea Sky, later took to her Instagram to post a video giving people a head’s up about her health. She notified them about her injuries and a surgery which was required to get her jaw fixed. She mentioned that the approximate amount required for the surgery was 20K USD (14 lakhs INR approx).

A friend of Genea’s went on to create a crowd-funding page asking the public for help in covering Genea’s medical expenses. Surprisingly, hundreds of people came forward and contributed to the cause. They have successfully raised 29K USD (20.6 lakh INR) until now!

Genea, in a recent post on Instagram, stated that the surgery went well and she is on her way to recovery.

Today has been a very long day. My surgery went well. My jaw is currently wired shut so please refrain from calling me as of right now and bare with me on replies because my phone hasn’t stopped blowing up. Everyone’s love & kind words have not gone unnoticed whatsoever and it means so much to me that all of you have blessed me and uplifted me in so many ways. I am overwhelmed in the best way by all the support. I was really nervous as this all started blowing up because people are cruel and this is a very sensitive time for me. But I never imagined so many people would stand behind me in a situation like this and that has outweighed all the negativity by far. I am beyond grateful for you all. I am in a tremendous amount of pain but i am ready for this road to recovery so I can get back to my life. I will continue to update everyone over the course of my recovery but thank you once again for EVERYTHING 🙏🏽

It is disappointing how clubs encourage such dangerous and life-threatening acts in the first place. We hope there comes a time when club-runners have a change of heart and necessary precautions are taken to stop such incidents from occurring any further.

Till then, we wish the woman a speedy recovery!