‘You’re The Problem’ Man Says Women Are Single Nowadays Because Of Feminism, Gets Slammed

Every day, several women come across people on the internet who hate the concept of feminism and think it is a problem. There are the infamous chants of ‘Not All Men’ and opinions about how feminists are nothing but ‘man-haters’.

Speaking of which, a video of a guy ranting about how even beautiful women are single nowadays because of feminism has gone viral online. He says that women are not “queens” or a “prize”. He asks women not to expect him to “chase” them as he’s a “dominant”. 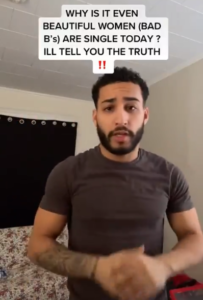 “Why is it that even beautiful women are single today? It’s simple – feminism. Feminism taught you, ‘You’re a queen! You’re god’s gift to this earth! You’re the prize!’ No, you ain’t. You ain’t a queen. You’re never gonna be my queen as you ain’t my mother. You don’t love me unconditionally. You love me under conditions.” 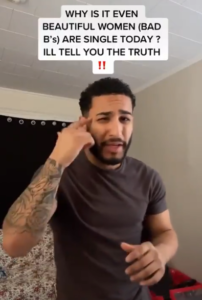 He goes on to add, “The problem is, I’m a man. When we go out, you expect me to take care of you. I pay for you. But when I tell you to do something, then do it. Don’t expect me to chase you, beg you, get on my knees. I’m not submissive. I am dominant. You’re the problem. You are delusional.”

His video faced tremendous flak online. Many expressed how he might be insecure about himself, that being single is not a problem, and how the guy is basically a “jerk”.

If you really are an “alpha” provider, why are you so upset that you have to provide?

It’s because your funds are so low and “providing” is negatively impacting your wallet.

Now you are mad & keeping tabs on what is owed, because your “alpha” is being tested & it is fragile.

Men can we retire this “provider” concept and be “supporters” or sumn.

Cuz all I hear is scorekeeping. Doing things because you expect a return.

Support each other, and real partnership isn’t about being 50/50. It should be 100/100. You both give according to your strengths.

His curtains aren’t even on a rod – just nailed up there. Also the batteries in his smoke detector need changed. No woman wants you because you can’t even do the basics of being a grown man with a job and his own place.

the thing is, he almost had me in the first half 😭 i thought he was going to say its cause feminism got women realising their worth and wont settle and dont have to conform to social norms or pressure to marry young. but nahh boy went the other way

I find it even more disturbing that thousands of people actually resonate with the man.

However, there were also some people who supported him:

80% of what he said was true. In a mans life, his mother is his Queen. If he’s treating you like a Queen before y’all have had a connection built to sustain that level of chemistry, then it’s going away fast. He was wrong when he said “Women are the problem”. He could’ve

To accept the flaws of someone and love them regardless is submission, and women refuse to submit but men are always submitting, makes women the dominant, but women don't like that, they like men who are sure of themselves

There are several people like him who not only don’t understand the basic concept of feminism but also resonate with every word that this guy said. What do you think?