Sushant Singh Rajput’s death case took a massive turn when his father KK Singh filed an FIR in Bihar against his rumoured girlfriend and Bollywood actor Rhea Chakraborty. He levelled several allegations against her in the 6-page FIR including theft and cheating. Soon after, Rhea moved to the Supreme Court and petitioned to transfer the case from Patna to Mumbai calling for an “impartial investigation”, reported Hindustan Times.

Still struggling to face my emotions.. an irreparable numbness in my heart . You are the one who made me believe in love, the power of it . You taught me how a simple mathematical equation can decipher the meaning of life and I promise you that I learnt from you every day. I will never come to terms with you not being here anymore. I know you’re in a much more peaceful place now. The moon, the stars, the galaxies would’ve welcomed “the greatest physicist “with open arms . Full of empathy and joy, you could lighten up a shooting star – now, you are one . I will wait for you my shooting star and make a wish to bring you back to me. You were everything a beautiful person could be, the greatest wonder that the world has seen . My words are incapable of expressing the love we have and I guess you truly meant it when you said it is beyond both of us. You loved everything with an open heart, and now you’ve shown me that our love is indeed exponential. Be in peace Sushi. 30 days of losing you but a lifetime of loving you…. Eternally connected To infinity and beyond

Now, Rhea told the Supreme Court that she has been “falsely implicated” in the FIR registered against her in Bihar, reports DNA. Her plea read:

“In peculiar facts and circumstances of the present case, the petitioner has been falsely implicated in the present case filed by at the instance of Krishna Kishore Singh.”

In the plea filed on Wednesday, Rhea alleged that Sushant’s father is using his “influence” in illegally roping her in the case.

Rhea in her plea, agreed that she was in a live-in relationship with Sushant till June 8 and claimed that Sushant was suffering from depression and was on anti-depressants.

“It is pertinent to mention that the deceased and petitioner were in a live-in relationship since a year up till June 8, 2020, when the petitioner had temporarily shifted to her own residence in Mumbai.”

“The deceased was suffering from depression for some time and was also on anti-depressants and he committed suicide on the morning of June 14, 2020, at his Bandra residence by hanging himself. ‘Unnatural death report’ was filed by Bandra police station at Mumbai and causes leading to taking of such drastic steps are being examined,” added the plea.

Respected @amitshahofficial sir , I’m sushant Singh Rajputs girlfriend Rhea chakraborty, it is now over a month since his sudden demise . I have complete faith in the government , however in the interest of justice , I request you with folded hands to initiate a CBI enquiry into this matter . I only want to understand what pressures prompted Sushant to take this step. Yours sincerely Rhea Chakraborty #satyamevajayate

Rhea Chakraborty in her petition further accused Sushant’s acquaintances of influencing the probe, reported India Today. She said that his friend, Siddharth Pithani was forced to give false statements against her, as mentioned in his email to Mumbai Police.

She further alleged that in the email sent by Siddharth he mentioned about receiving a conference phone call from Sushant’s brother-in-law and senior IPS officer OP Singh and Sushant Singh Rajput’s sister Meetu Singh, asking him details about Rhea. 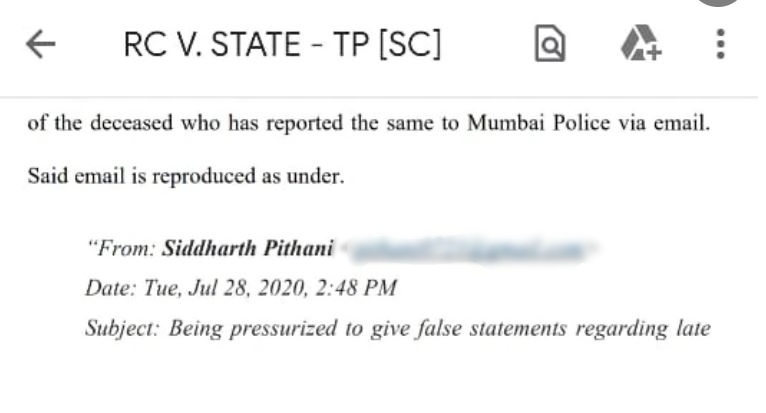 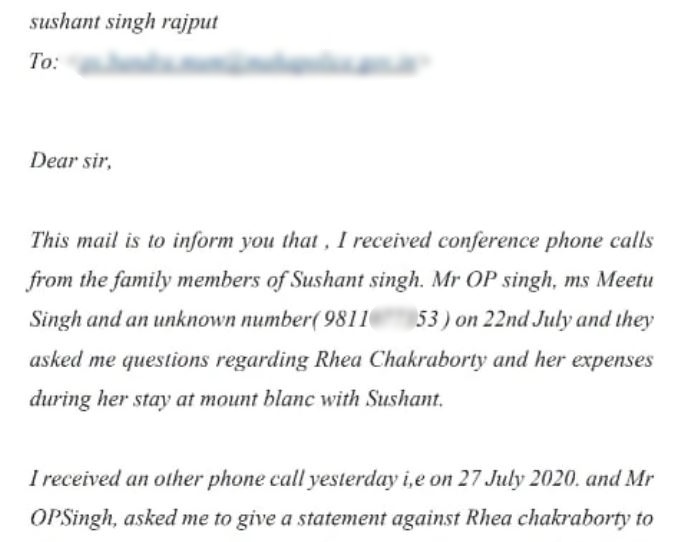 I was called a gold digger ..I kept quiet I was called a murderer ….I kept quiet I was slut shamed ….I kept quiet But how does my silence give you the right to tell me that you will get me RAPED and MURDERED if I don’t commit suicide @mannu_raaut ? Do you realize the seriousness of what you have said? These are crimes, and by law no one, I repeat NO ONE should be subjected to this kind of toxicity and harassment . I request @cyber_crime_helpline @cybercrimeindia to please take necessary action . ENOUGH IS ENOUGH

Her plea further stated, “The petitioner has filed a complaint at Santa Cruz police station in Mumbai against the death and rape threats. It would be just and expedient if the transfer of the case is directed from Patna to Mumbai.”

According to reports, the Bihar government and Sushant’s family have filed caveats before the Supreme Court challenging Rhea’s petition.