Ranveer Singh-Deepika Padukone’s Wedding Dates Got The Celebs As Excited As #DeepVeer Fans!

As someone who had accepted Ranveer Singh as the love of her life since Band Baaja Baaraat, the news of his impending nuptials with Deepika Padukone are a matter of mixed emotions for me. But even I, or any of the actors’ biggest fans, can’t deny that #DeepVeer are made for each other!

And now, finally, after an entire year of speculation, Ranveer Singh and Deepika Padukone have officially announced their wedding dates for the world to know!

In simulataneously shared Instagram and Twitter posts, Ranveer and Deepika announced a two-day wedding slated for November 14 and 15! The invites were in both Hindi and English!

Ram and Leela, Bajirao and Mastani, King and Queen are finally getting married!

As expected, the announcement BROKE the internet into a million heart shaped confetti that just kept sprinkling all over everyone’s timelines!

The most endearing thing though was to see how not just us fans but even celebs and peers of the Bollywood couple were mad excited about this union finally becoming official!

I’m talking legit fangirl-level excitement, the kind that a person would show when their favourite couple/friends announce that they’re getting married!

Richa Chadha was making heart eyes and hand gestures at the news!

Congratulations @deepikapadukone and @RanveerOfficial ! May you be as happy as any two people possibly can! Wishing you the world, joyously ❤️❤️❤️ pic.twitter.com/QSLrHhi1ka

And so was Shruti Seth!

Vishal Dadlani was hooting for the power couple!

Never mind the "power couple" stuff. You guys are going to be magic together, simply because you're both amazing people! Big love, @deepikapadukone & @RanveerOfficial ! Such a happy announcement! 🙂 https://t.co/svWjV6qQLS

Thrilled to bits for the unbelievably lovely @deepikapadukone and insanely amazing @RanveerOfficial !! Wishing one of my absolute all time favourite on screen couples a blockbuster of a life ahead with nothing but love and more love !! Muaaaah ♥️💋

Manj Musik was like that one friend of the groom cracking all the ‘shaheed’ jokes!

Big love! All I can say is MAN DOWN MAN DOWN!! CALL FOR BACKUP!! LOL love u meri Jaan. Congrats to both u beautiful souls. Match made in heaven. 🎉💐🙏 https://t.co/9uuXwXeOgp

Armaan Malik had this excellent observation to make and we totally back him up on this!

Super happy for you guys ♥️ your wedding is gotta be royal coz you are marrying a Queen! 🤩👸🏻 #DeepVeer forevaaa 🔥💯 https://t.co/KQVM7kYIkI

Chang is basically every guy with a massive crush on Deepika Padukone right now!

Me: Heartiest congratulations, you two @deepikapadukone @RanveerOfficial 🤗🤗🤗 You're beautiful together!

Oh but you wait! The real craziness was all saved for Instagram, where Ranveer Singh and Deepika Padukone’s peers were not shying away from expressing just how excited the news made them!

Clearly, a lot of them must’ve been more clued in on the wedding announcement than all of us regular folk. But it was still fun to read all that enthusiasm in the comments of Baba and DPs Instagram posts!

Karan Johar and Alia Bhatt, who grilled Deepika so much on Koffee With Karan about the wedding date finally seem to have some closure!

Something tells me DP already told them BTS! 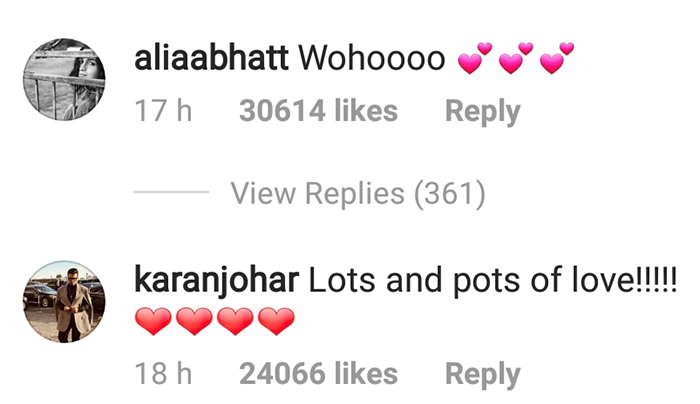 Priyanka Chopra went full on tease-mode with her ‘piya’ comment on Deepika’s post! Thinking of that ‘Pinga‘ camaraderie!

PeeCee’s excitement for her Bajirao Mastani costars was through the roof because her comment on Ranno’s post was super adorable!

Ranveer’s female costars seem to be the most pumped up about his wedding!

While her Mimi did prefers ‘Ranno’, Parineeti Chopra revealed a rather interesting nick name for Ranveer! ‘Nutella babluuuu’!

What did I tell ya? Richa Chadha is super thrilled about this news!

Another celeb expressing their joy in Devnagri? Kalki!

Since Baba is yaaron ka yaar and sabka bhai, this bros were super happy for him!

Soon-to-be sister-in-law Anisha Padukone also made sure she dropped a few dancing emojis on both jiju Ranveer and sis Deepika’s posts!

Gotta start rehearsing for the sangeet!

Now now how can we forget meme Twitter amidst all this? Such a huge news, that too involving Ranveer Singh and his mockable fashion sense is major meme fodder!

Sanjay Leela Bhansali be directing this shaadi too!

When Ranveer decided he was ready to play THE only Sacred Games that mattered with Deepika!

The Civil War in the Singh-Padukone household that this union just prompted!

Everyone wanted to know who the GROOM would be wearing!

*ranveer orders a lahnga*
deepika : wow it's so pretty. thank you
Ranveer : pic.twitter.com/5XABjG19EG

The wedding’s barely a month away and the excitement is palpable! Rumours point at a Lake Como, Italy, wedding and now that we know the dates, control nahi hota! Congratulations to the most amazing couple!