#OffendEveryoneIn4Words Is Twitter’s Latest Trend And What Offends People May Surprise You!

The internet today is like a minefield. You never know what statement might trigger one of the mines to explode. And a single explosion could leave a tonne of scattered shrapnel of hate all over the field. Basically, something always tends to offend someone on the internet. Well, a recent Twitter is looking to take this observation to its very extreme.

#OffendEveryoneIn4Words is trending on Twitter and you’ll definitely want to get on board. Check it out:

1. Yeah that pretty much nails it.

2. Shocking how many people still generalise.

3. Yup, you’re bound to offend someone.

8. For some reason, that offends the internet. Wonder why?

#OffendEveryoneIn4Words I am a feminist

9. We all have that one friend. 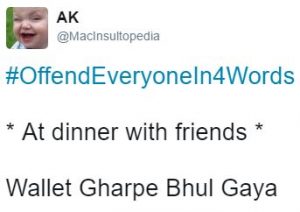 11. Wouldn’t want your dentist seeing that. 😛

Your baby is ugly. #OffendEveryoneIn4Words

17. And you could hear the phone smash up against the wall.

20. Maaaannn… nothing can top that! (United: hold my beer)

This list is in no way exhaustive because as I said, anything can offend someone on the internet. However, this trend does well to make this fact strikingly clear. Of course, it serves up a healthy dose of laughter too!