Recently, a leopard was spotted resting on the middle of a road in Telangana. The lockdown and the lack of human activity have caused animals to reclaim its lost space. Several wild animals have been spotted on the roads across the world. While it is a joy to watch them, it is also a place of concern because once the lockdown is lifted, we may come across cases of human-animal conflict.

For example, in an incident in Hyderabad, two men were chased by a leopard under broad daylight, reports NDTV. While one of them managed to climb a truck safely, the other was attacked by the leopard when he attempted to jump onto the truck. 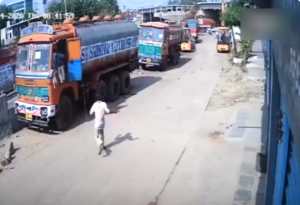 In a CCTV footage that has gone viral, the leopard is seen pouncing on the man and grabbing his leg. Luckily, the man manages to shake off the leopard. 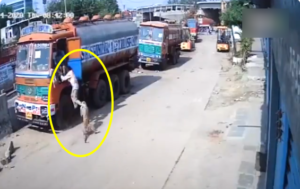 Next, the leopard is seen trying desperately to leap over a wall. This was because a group of stray dogs were barking furiously at it and cornered it. The leopard then fleed the spot. 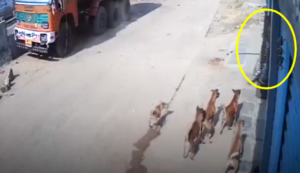 In the comment section, some people empathised with the leopard claiming that humans have destroyed their homes. Others thanked the heavens for stray dogs, without whom the man would probably end up getting severely injured.

poor creature, we have destroyed his home 😰

Coz man destroyed his home his habitat and what would you do if someone did the same to you pic.twitter.com/tuxGNo2sz8

who said stray dogs were a nuisance in India

Salute to those stray dogs 😂

he is a fool to run towards a closed shop shutter to save his life, where he would hide? but anyway got lucky enough to escape for the day

We come across so many news of stray dogs being attacked by people for causing a ‘nuisance’ in their neighbourhood. Let’s not forget that when the going got rough, it was these dogs which saved a man’s life!