Justin Trudeau looks like a perfect love child of the many fictional heroes belonging to the world of fairy tales, no? That smile, that sass, that oh-my-so-charming confidence. And to top it all, following a landslide victory, the charmer was sworn in as the second youngest Prime Minister of Canada, on Oct 20, 2015.

A complete package and more, I must say.

But, keeping aside the head-over-heels love of a fangirl, there’s something about Mr. Justin Trudeau that is making Indians suffer a sudden rapid adrenaline-rush over this very dreamy Prime Minister.

1. You would have already seen his very accurate Bhangra moves, right?

I hope you know his such-gaiety-much-wow was part of the celebration of 66 years of India’s Independence.

2. And not that we should care about it much, but look, he is a boxer too…The one with a good heart! :’)

Watch him give a punch with such determination to senator Patrick Brazeau during a charity Box match in Ottawa, March 31, 2012.

Maybe we can see a match between Vijender Singh and him sometime? 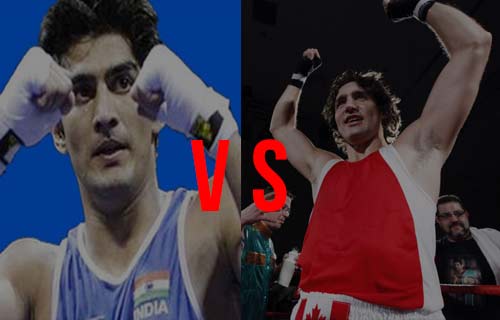 3. Moreover, since India and Canada are more like Bhai-Bhai, I think it won’t be a long wait until we see him here soon

4. Mr. Modi has congratulated him on his victory already from India’s side, and guess what?

5. He has even invited the charmer (and the family) to pay an official visit to India

But, what does a regular Indian care about an official meeting?

We just can’t wait to see him binge on spicy Indian food to catch the glimpse of redness on that flawless French complexion.

And, water dripping from those magical blue eyes…ooooh.

The beauty he would reflect being in misery. *_*

6. Plus, I hope you know he is quite a hit among the Punjabis in Canada

More so perhaps, because a little over 100 years, the Punjabi votes have played a crucial role in the victory of Liberal Party, which now, under the leadership of Justin Trudeau, is in power.

7. Also, ahem… Have you seen this? It was for a charity fund-raiser.

Well, we aren’t demanding too much. But, perhaps, a good look at his tattoos would be enough to kill, yet inspire many hearts.

Ajay Devgan, sorry, we are swooning over this one for a while.

8. For those who still haven’t got a good look of this beauty hidden under the thick of various talents and Prime Ministerial sass…

Go gaga over this:

Canada, how is it even legal for your new prime minister to look like this. pic.twitter.com/oVa5wao2ek

Well, keeping all the fandom frenzy aside, Justin Trudeau is also the first child ever of a former Prime Minister to take the seat in Canada. His father, Justin Pierre James Trudeau, who passed away succumbing to prostate cancer in the year 2000, served as the 15th Prime Minister of Canada.

Moreover, Trudeau’s election as the Prime Minister of Canada is a big deal because it was in Justin Trudeau’s presence that India was sanctioned peaceful nuclear explosion by Canada. And in December of 2015, in over 4 decades, it is expected that India would receive its first shipment of uranium.

Trudeau is extremely promising as the new leader and has already taken up the charge quite well.

For the Indian youth, though, we just can’t get over the fact that someone who looks like a dream man to many (gender no bar), is so much of an Indian when it comes to dancing with two left feet. Thank God for conspiring things into making him the lead of Canada, which is now evidently, a home outside of the home for Indians.