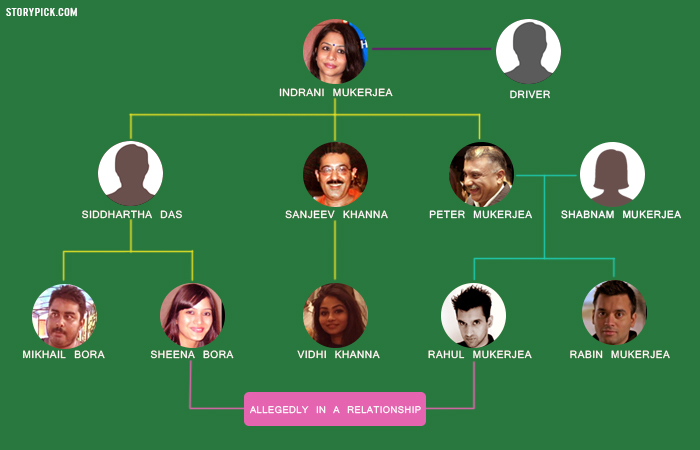 It has been three years since Sheena Bora went missing. As reported by NDTV, 22-year-old Sheena, who was living and working in Mumbai, was introduced to people by Indrani Mukherjea as her sister. Whereas in reality, she was her daughter.

There was no missing complaint filed by Indrani after Sheena mysteriously went missing. In fact, people who asked her about Sheena were told that she had moved abroad for further studies. However, no one was in touch with her. The people she was last seen alive with were Indrani Mukherjea, her driver, and her former husband Sanjeev Khanna.

The curious case takes another turn when another secret is unveiled. In a news report by IBN Live, Peter Mukherjea claims that Sheena was in a relationship with Rahul Mukherjea who is Indrani Mukherjea’s step-son and Sheena’s step-brother. According to him, their relationship was not approved of by Indrani, but the two of them continued to date and according to the news reports, they were pretty casual about it. After Sheena went missing in 2012, Rahul tried to find her but his attempts were in vain.

As reported by Mid-Day, three months back, an anonymous call from a source told Mumbai police that Sheena is missing. The police soon got active and investigated the case. While investigating, they soon discovered that things were murky in the case and many fishy secrets were dug deep. To ensure that the culprits involved in the crime remain oblivious about their investigations, they kept things low.

Later, their findings revealed that Indrani’s driver, Shyam Lal, had been frequently visiting Raigad. The police tightened the security on Shyam Lal and thereafter on August 21, they arrested him regarding an illegal arms case but questioned him about Sheena Bora. He gave in to the police investigation and disclosed that he along with Indrani Mukherjea and her ex-husband Sanjeev Khanna were involved in Sheena Bora’s murder.

On Indrani’s command, he had strangled her and burnt her. He admitted dumping Sheena’s body in Raigad. The investigation also revealed that during the same time a charred body was found in Raisen which was burned to the extent that it couldn’t be identified. However, the police find the evidence enough to conclude that it was Sheena’s body.

Indrani Mukherji who was not in the country that time was kept away from the issue suspecting that if she finds out about the case she might delay her return to India.

A recent news by Mid-day reported that Indrani Mukherji was picked from her house in Worli and was taken to Khar police station for questioning. During the questioning she first denied the allegations, but later gave in after she was made to testify with her driver and he gave her away. Both her driver and Indrani have been booked under sections 302 (murder), 201 (disposing evidence or giving false statements), 363 (kidnapping) and 34 (common intention) of the IPC.

As the statements given by Indrani and her driver Shyam Lal illustrated that Indrani’s ex-husband Sanjeev Khanna was also involved in the crime, he was picked up from Alipore, Kolkata last night by the police. Sheena’s step brother and former lover, Rahul Mukherjea was also called in for questioning by the Khar police. He was allowed to go back after they took his statement.

Not just the friends and family of Indrani, but the whole of the nation is stunned by the horrifying mystery that this case has created. The twisted relationships and the report that a mother killed her own daughter is left everyone shocked.

Peter Mukherjea’s tell-all book’s tentative title: Why My Wife Murdered Her Sister Who Was Actually Her Daughter Who Was My Son’s Girlfriend

#SheenaBora murder case: Were Peter, Mikhail the next targets? https://t.co/EjeWs9qySB

The questions that remain:

Why did she kill Sheena?

Sheena’s younger brother, Mikhail Bora, has given a statement to ANI where he has said both he and Sheena are Indrani’s children. They have grown up in Assam with their grandparents. He said that he is sure that Indrani has killed his sister and if she denies any of the facts he will come forward and make his statement.

Why was Sanjeev Khanna involved?

In a statement given earlier to TOI, Khanna clearly stated that he did not know anything about Indrani’s previous marriage or her children. He had seen a picture of two kids which Indrani kept close, but upon asking he was told that they are her siblings. Later, the same man was arrested by the police on the suspicions of his involvement with Sheena’s murder.

How can Peter Mukherjea not know that Sheena was her daughter?

Mukherjea in his statement given to Telegraph stated that he did not know that Sheena was Indrani’s daughter. He also denied having any knowledge of the fact that Indrani had any property in Raigad.He said that he had asked his son Rahul to move on after Indrani told them that Sheena had moved to Los Angeles.

Money or reputation? What was the motive?

It is reported by Tehelka that following the audit that Indrani and Peter’s company 9x faced an audit and they had transferred some funds in their relatives’ accounts. It is rumored that Sheena refused to return the money which created a row between them. There are also chances that Sheena was planning to expose Indrani’s past in front of her husband Peter and to avoid that Indrani murdered her.

There are many unsolved mysteries associated with this issue. News channels are speculating, police is investigating and Sheena’s friends and family are trying to get over the shock. As we get more updates about the case, we will keep you updated.