Divyanka Tripathi‘s fans are going to be ten times more careful, from now on, before they post anything nasty about her hubby Vivek Dahiya.

The ‘Yeh Hai Mohabbatein’ star bashed her own fans on Vivek’s Instagram post after they called him a gold digger. They also said that he married her only for her fame and money. Not only that, Divyanka scrolled through some 600-odd comments, only to read the hate message her fan posted.

Vivek posted a vacay selfie of him a couple of days back, on which the fan hate-commented.

Time for some self-time. Vacation calling!

“You are so pathetic. Everyone knows you never loved Divyanka. Just for fame and money that the main reason you married Divyanka. I feel really bad for her. Her choice was so wrong. She loves you so much. You never loved her (sic).”

Irked by it, Divyanka slammed the fan by saying:

“Just shut up you loser…do not take my side when you don’t even know us enough! You attention seekers have no other job! It’s a couple’s decision and the world is definitely not a part of it. Specially you bashing idiots don’t ever take my name again. Like us…be here! Don’t like us…Don’t bother to even peep into our post. (sic)”

And that wasn’t it all. Another fan, who got upset by Divyanka’s comment and tried pacifying her, said:

To this one, she said: 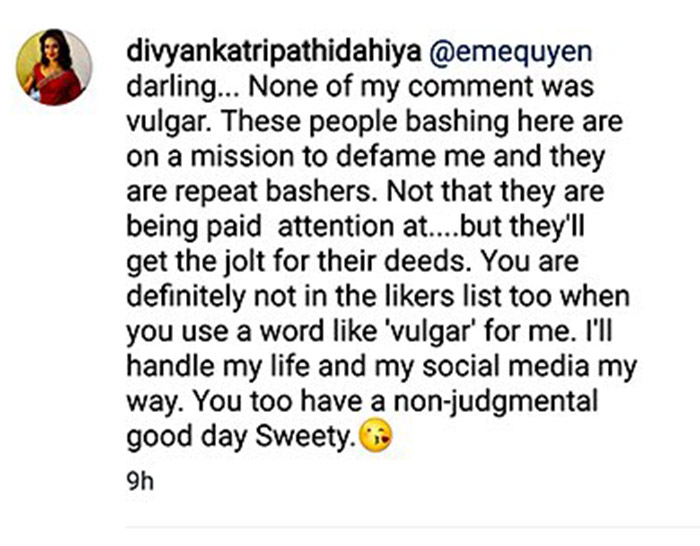 Looks like, Mrs Dahiya doesn’t mince words and is too possessive about her hubby. The two got married in July and have been happily married, ever since.