Having been fed on a steady stream of American rom-coms with grand, romantic proposals, I’m a little fascinated with the concept of engagement rings. And when I heard that Nick Jonas had popped the question to Priyanka Chopra, that too with nothing less than a Tiffany’s ring, I was desperate to see it!

@nickjonas and @priyankachopra were out on a double date in London with @joejonas and @sophiet for Priyanka's pre-birthday celebrations. 💕❤ #Nickyanka #Nickjonas #priyankachopra

I know, you think I sound like one of those OTT girls or neighbourhood aunties who would squeal with delight at the thought of someone getting married. But hey, it isn’t just me.

Ever since the news of PeeCee and Nick’s reported engagement, paparazzi has been watching the two like a hawk.

Any sparkle, any glimpse of the ring that Nick Jonas shut down a New York Tiffany’s store to procure for PeeCee would be a sight for the expectant eyes of fans and media alike. And sure, there have been near misses here and there…. 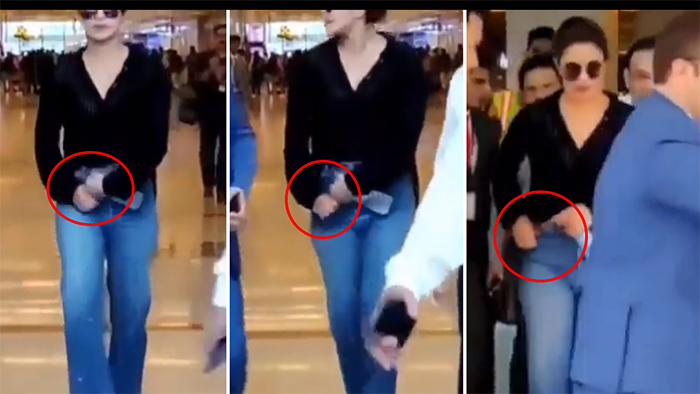 But looks like Priyanka Chopra is tired of keeping the diamond and her happiness hidden! Ladies and gentlemen, we have a sighting!

It was at Manish Malhotra’s party that PeeCee, amongst a bevy of celebrities, attended. It was a fun night with all the designer’s friends letting their hair down.

And that’s where, while browsing through all the pictures of this chilled out party scene, this was spotted!

Peecee and I getting our pouts in order ! 😂

You see it, dontcha? Or will have to put a ring on it too? Well, here goes! It’s a little difficult to pay attention to anything else when there are two stunning ladies like Priyanka Chopra and Raveena Tandon in the frame. But OMG! THE RING!

“Priyanka’s ring is a high quality cushion cut weighing around 4 carats. It looks to be somewhere around a G color, VS1 clarity which, from Tiffany & Co, would have a value of around $200,000.”

PeeCee seemed pretty relaxed about letting the ring steal the attention in most of her pictures…. 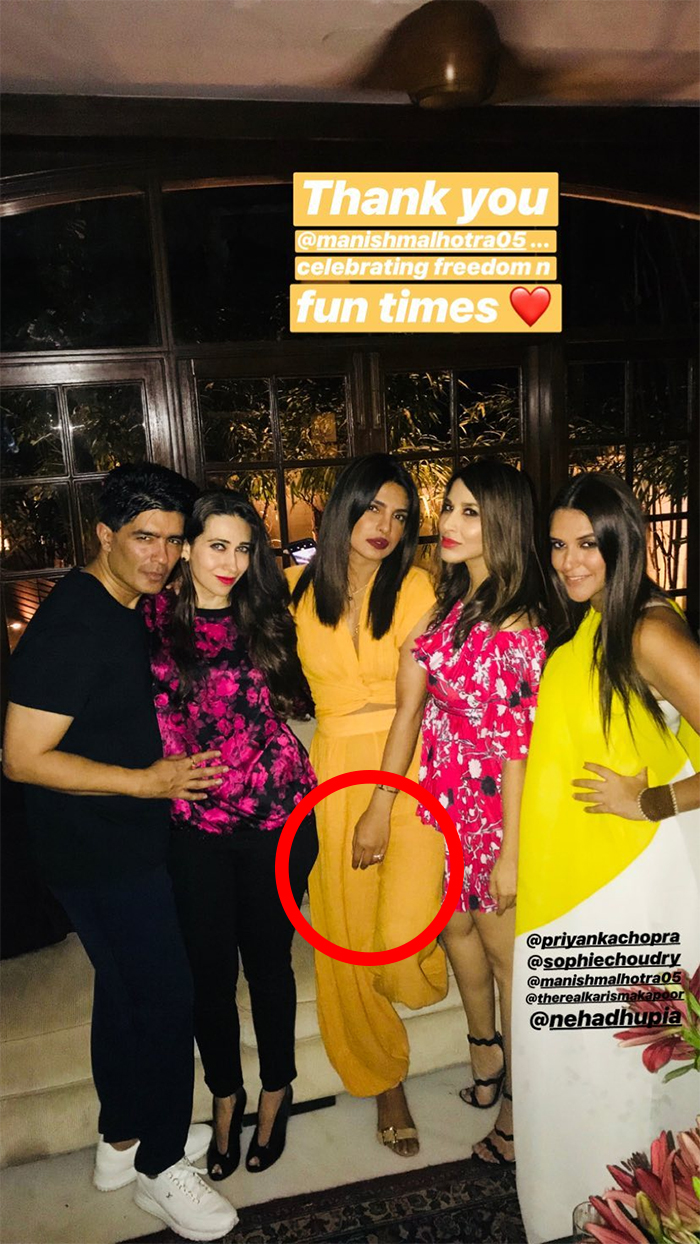 Here’s some more pictures of the desi girl, enjoying the night with her industry friends. I wonder if we’ll see them all together again at PeeCee and Nick’s engagement party…..

If the media reports are to be believed, Nick Jonas and his family are flying down to India this weekend for a party!

According to a E!News, a source revealed,

“Nick Jonas and his immediate family are traveling to India this weekend to attend an engagement party hosted by Priyanka’s family. It’s going to be the first time that their families intermingle and get to know each other.”

It’s pretty much like one of those traditional meet-and-greet ceremonies between the bride and groom’s families. And both Nick and PeeCee are super excited! The same source further revealed to E!,

“Priyanka wants everything to be traditional to respect her family’s values, and definitely an Indian wedding. Everything is very secretive but guests are expected to head there starting tomorrow. All of the plans are moving quickly and Priyanka and Nick do not want to have a long engagement.”

It’s all set, folks! Looks like the #NickYanka wedding is closer than we expected!