Growing up, most of us are subjected to a LOT of advice, sometimes by the quintessential Pammi aunty to ‘eat less and walk more’ and other times by social media to keep our opinions to ourselves. Well, there’s no dearth of people giving muft ka gyan, but rarely do we meet anyone who talks about the real issues.

Well, this 21st-century dad’s two-cents to his daughter on her birthday is what we all need to hear time and again.

Twitter user Rupashree recently shared a screengrab of her dad’s message that he had sent her on her 21st birthday, reported Times Now.

I don't deserve my parents. pic.twitter.com/8tkf3ONSXz

Through the heartfelt text, her dad advised her that she shouldn’t be crying over people who don’t deserve her. He went on to say that “crying over biryani is better than crying over people”. But being a typical Indian father, he also told her to change her diet and read Hanuman Chalisa for inner peace.

He concluded his wholesome WhatsApp message by saying that the next time anybody tries to harass her, she better break his bones and bring him to their hospital. 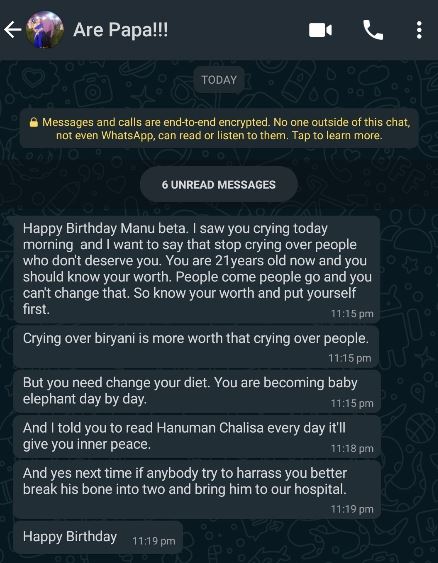 People were head over heels in love with this dad and his thoughtful wishes.

"Crying over biryani is more worth than crying over people"

Someone needs to put that on a billboard..😀

To you, uncle, aunty & your entire family ❤️ pic.twitter.com/WauThLxLmd

I like the second last msg break the bones

That's the advice my dad gave me when I was getting married , one wrong word n you break his head , baki main dekh lunga 😂😂 I was dating the guy for seven years damn it , my popsie was an absolute darling n now 25 yrs later my hubby says the same to my daughter 😂😂

Oh my god, this is so sweet. Just after biryani, it was baby elephant and then Hanuman Chalisa..

And what's this obsession father's have with Hanuman Chalisa 🙂

Your dad really is a gem huh pic.twitter.com/2JA6aPzLWp

You're lucky, don't worry you will make them proud one day!
U r parents ❤❤
Best part:crying over biryani is more worth that crying over ppl!
Hanuman chalisa will really help u!
Happy birthday girl 🎂 !

Some of us just want that type of connection with parents! You are really blessed

The best thing I saw today on Twitter ❣️ and yeah my parents tell me the same thing, I mean not to break a girl's bones 😂😂 but to not give a shit who is not worthy. 😊 Bdw Happy Birthday 🎂🎉🍻 May you find the one you deserve but may you love food more then humans. 😅 Cheers🍻

Give him the Papa of the year already! pic.twitter.com/xbreiA7MLI

No previous messages, no conversations and suddenly 6 messages.. are bilkul possible hai 😄😄

Isn’t he the sweetest? What do you think of this daddy’s realistic and humorous advice for his pyari beti?