It’s a known British saying ‘hell hath no fury like a woman scorned’ which means you don’t wanna mess with an angry woman. But seems like this husband wasn’t aware of this. Hence, he paid the hefty price of cheating on his wife.

When a woman named Jenny came to know about her husband Steve’s wrongdoings, she decided to take him to task by embarrassing him for being unfaithful to her.

Jenny decided to get a full-page ad printed in a newspaper just to call him a ‘filthy cheater’. Not just this, the furious wife even used her cheating husband’s credit card to pay for the ad.

This is what the advertisement read:

“Dear Steve, I hope you’re happy with her. Now the whole town will know what a filthy cheater you are. From Jenny. PS: I bought this ad using your credit card.” 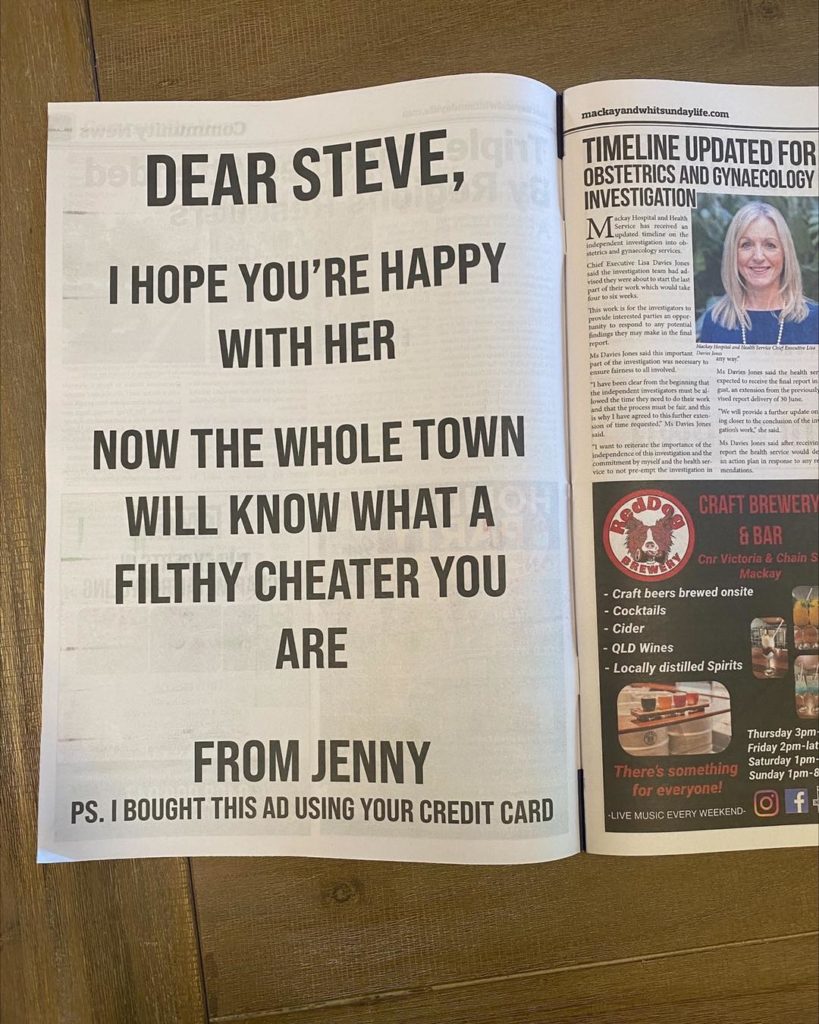 Even the Australian newspaper ‘Mackay and Whitsunday Life’ was surprised when they turned over to page 4 and found the ad by the wife. They even shared the screengrab of the ad on Facebook and addressed the FAQ regarding the ad:

1. We do NOT know who Steve is, but apparently he’s been very very bad.

2. We won’t be revealing any details about Jenny.

3. We have not charged the credit card in question.

Posted by Mackay and Whitsunday Life on Thursday, August 11, 2022

People online had a good laugh at how Jenny decided to take revenge on Steve. They even called her witty and savage.

I love that she used his credit card 🤣🤣🤣 https://t.co/ok5pSs4ENb

Good on you Jenny! Nothing like calling someone out on their 💩 behaviour! https://t.co/2YwOJghqtL

I've gotta admit this is some huge Jenny energy https://t.co/bOQVFL2Hot

A woman in Mackay posted a full page ad in their paper. Dear Steve. I hope youre happy with her. Now everyone knows what a filthy cheater you are.
Jenny.
P.S Your credit card paid for this ad.
Lol😂😂😂you go girl 👏👏

After Jenny’s advert went viral, a highway hotel publicly apologized to her on behalf of all the Steves.

2500km from #Mackay the Highway Hotel in #Adelaide is publicly apologising to Jenny on behalf of all the Steve’s 💯 https://t.co/42rHt4Xgfa

Jenny is being hailed a hero. Also, Steve, did you manage to find cover?