However, according to The New Indian Express, the three YouTubers running the channel including the channel owner Dinesh, host Asen Badshah, and cameraman Ajay Babu recently got into trouble for one of their videos wherein a girl explicitly talks about sex, drinking, the pandemic, and the lockdown. 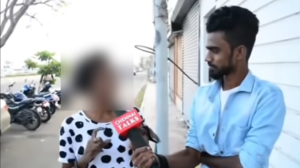 A complaint against the channel was filed by the same woman who featured in the video. She alleged that they violated the terms she agreed upon. She revealed that she was paid Rs 1,500 to speak in the video and that it was scripted.

“I told him to disable the comments section, but he refused to adhere to my request citing channel policy. The comments were so hurting and I went to a stage of depression,” the woman said, claiming that there were several comments slut-shaming her.

She added that the YouTubers posted the video on other channels too without her consent.

According to News18, the police received a tip-off from a fisherwoman at the beach who informed them that videos were being shot there and people were being asked “uncomfortable” questions.

The Shastri Nagar police inspectors went to the Besant Nagar beach and found the three guys with cameras and mics. All three have been booked for obscenity, intending to insult a woman’s modesty, criminal intimidation, and sexual harassment.

Their equipment such as the camera, smartphones, and mics have been confiscated by the police too. They have now been placed under judicial custody.

The internet can be a vile place. Hence, please be careful about what you agree to say on camera. You never know how it can backfire!