From Flight Lieutenant Bhawana Kanth (the first-ever woman fighter pilot of the Indian Air Force) to Avani Chaturvedi (the first woman solo pilot to fly MiG-21),  Indian women are breaking the barriers in the armed forces and making our country proud every single day.

Recently, in a welcoming move, the Indian Navy has deployed 2 female officers as ‘observers’ or airborne tacticians on the Navy warships. Sub Lieutenant Kumudini Tyagi and Sub Lieutenant Riti Singh have made history by becoming the first women airborne combatants who will operate helicopters onboard warships, reports India Today. 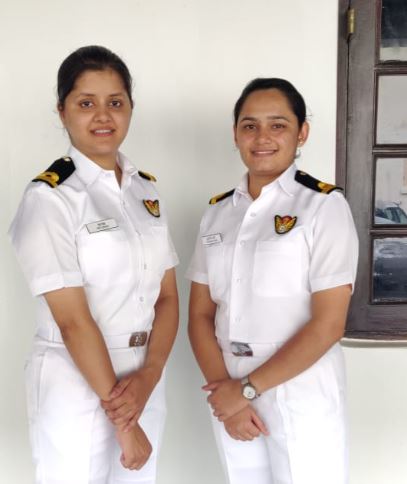 However, while the Indian Navy does employ several women officers in its ranks, thus far no women have embarked on warships for lengthy durations due to various reasons like the lack of privacy in the crew quarters and the lack of gender-specific bathroom facilities. But things will take a positive turn now as the two young officers are getting trained to operate a host of sensors onboard the navy multi-role helicopters.

Sub Lieutenant Kumudini Tyagi and Sub Lieutenant Riti Singh have been selected to join as 'Observers' (Airborne tacticians) in the helicopter stream. They were awarded 'Wings' on graduating as 'Observers' at a ceremony held today at INS Garuda, Kochi: Indian Navy pic.twitter.com/YVYAPKEnhw

She added, “Our training has been really rigorous. We’ve both completed over 60 hours of training. We take pressure and tension bang on. We don’t get worked up.” Sub Lieutenant Tyagi, who is from Ghaziabad, was quoted saying,

“We’ve been treated equally. Whatever training our male counterparts received, we went through the same training. It is a huge responsibility, the task is a challenge. We are looking forward to it.”

The offrs are part of the 17 offr (13 men, 04 women) who qualified as Airborne tacticians on 21 Sep [email protected] INS Garuda, #Kochi,#SNC. 13 male officers include 03 from #ICG who would operate on MR a/c & helos of @indiannavy @IndiaCoastGuard.@SpokespersonMoD @DefenceMinIndia @PMOIndia pic.twitter.com/Cc8sZNTiZo

Well, it makes us immensely proud to see women officers shattering glass ceilings in the armed forces. Kudos to the officers!