Be it Mumbai local or Delhi metro, you ought to find some kind of entertainment onboard the local transport that won’t make you feel bored until you arrive at your destination.

And this entertainment is not being hooked on to your screens, but we’re talking about live entertainment by people onboard the train as you.

Recently, someone boarded a Delhi metro at the peak hours when getting a seat to rest means you did something good that day. While this person managed to get a seat, there were women on the opposite side of the metro fighting for a seat.

The video that has now gone viral shows two women sitting with their huge bags on the seat. Then comes another woman who asks them to remove their bags that would make enough space for her to sit. But since these two women were apparently reserving a seat with their bags for someone who was supposed to join them from another metro station, they denied budging.

Annoyed by the arrogance of the woman in the yellow saree, the other woman goes on to sit in the small gap between her and another passenger. This is when another passenger intervened and said that she can’t reserve a seat for someone else and deny giving the seat to this woman. 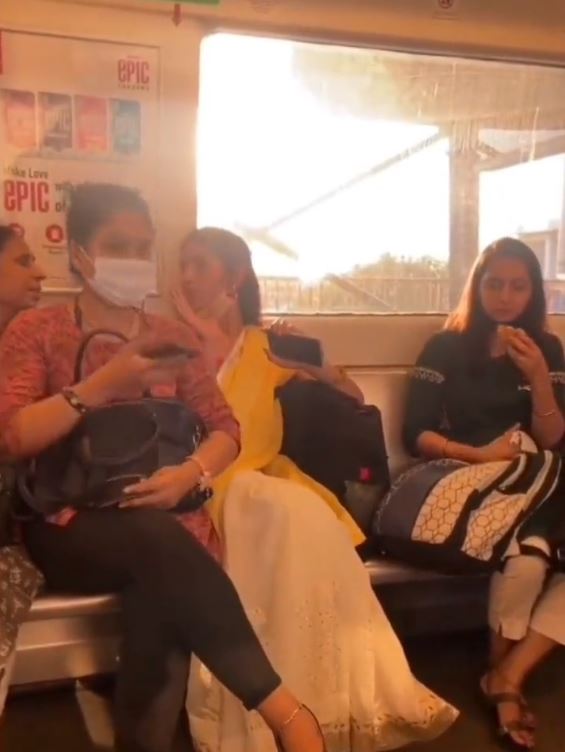 And while these three women are bickering and quarreling over the seat, the fourth woman (extreme right in green) is watching the drama unfold while savoring her burger. 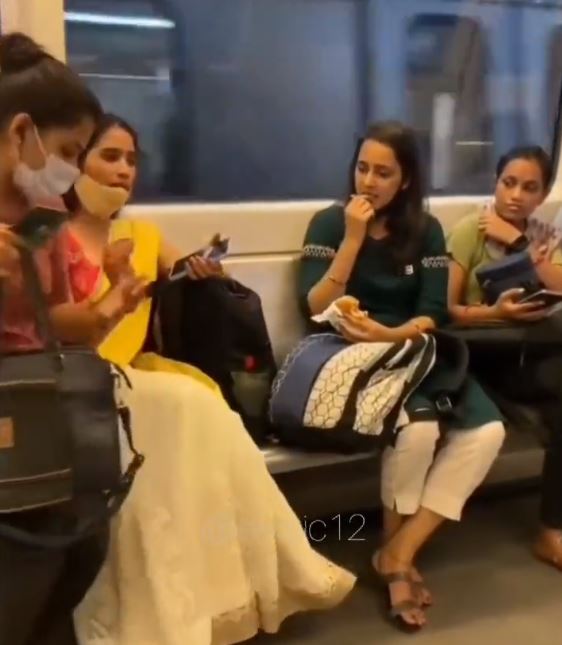 Max relate with the girl in green enjoying her burger 😂 pic.twitter.com/EcYwmJv4pY

The entertaining clip got people talking online. A lot of people said that it’s a common happening.

TBH even I wouldn’t keep my bag down on the dirty floor just to make space for a stranger to sit https://t.co/aD269rARHo

Is this common in delhi or what?

I have travelled in Mumbai and Bengaluru metro, nobody occupies space by using bags, people don't eat burgers in metros

And if people can't find space to sit, they stand https://t.co/3EcCrTfm1I

Delhi metro is a whole other vibe fr https://t.co/yRwM5C6OXC

Not an advocate of mindless violence but this would have been easily resolved in a male compartment with a couple of punches/ shoves. Not elegant , but extremely effective. https://t.co/wmoPfxXRQO

I have seen these types of situations in public transport https://t.co/wHPqsmmTpe

This used to happen in my school bus all the time. Keeping bags next to you on the seat was some kind of big thing, so you keep it and fight with others like this. https://t.co/Fdvj4SsSyf

That’s actually 99% of Delhi esp in women’s coach. Once I had a terrible cough attack and not a single person offered water 😂

However, some highlighted how the woman in green remained unaffected by all the drama, enjoyed her food inside the metro, and even threw a part of the ketchup sachet on the floor.

Meanwhile lady in green dress has occupied the seat with her baggage, open the ketchup pack and throws it on ground..and that Tricolor pin on a yellow saree..it demonstrates everything that is wrong with Indian middle class! https://t.co/Pamp54GCQg

Found my alter ego enjoying a burger amidst all the drama https://t.co/ZqtOP3xbHk

I wish i could be that cool with the things around me. https://t.co/EEX4na3gmU

It is true indeed. Common sense is really uncommon in people. But also hats off to the lady in green who has "i don't give a f*** attitude." 😂☺️ https://t.co/nUg1zWs1qe

The Green Dress lady is no less.
1. Hijacked the seat with her own bag.
2. Opening the sauce packet, and throwing the garbage on the floor.
3. Uske sir ke upar ek sign hai, “No Eating and Drinks” in Metro 🫤 pic.twitter.com/GvUmejlXbc

Should not. For one, she has kept her bag on seat not allowing another fellow passenger to even have a courtsey of being offered a seat. Second, she is throwing ketchup packet in the train. Seems awkard to relate to such kind of individuals.

Eating is not allowed in metro let alone throwing leftover here and there. One more reason why we are third world and don’t deserve better transport.

This is the female version of the trending “Boht jagah hai, nahi jagah hai” video. Also, people who don’t follow rules and destroy public transport like this shouldn’t be allowed on one.