You will find several ‘coolies’ or rail porters every time you visit the railway station. They insist on carrying your luggage, no matter how heavy it is, for a small amount of money. The problem with ferrying around heavy luggage is that it takes a toll on one’s body. Which is why it is necessary for authorities to find other alternatives, likes trolleys, to rid the porters of such inconvenience.

I say this because recently the Ministry of Railways took to their official Twitter account to post pictures of female “coolies” for which they faced tremendous backlash, reports Hindustan Times. 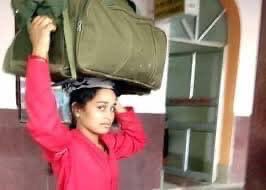 “These lady coolies have proved that they are second to none,” the caption read.

Working for Indian Railways, these lady coolies have proved that they are second to none !!

The fact that they equated a harmful act of labour with empowerment, several people on the internet including Shashi Tharoor heavily criticized the Ministry of Railway for exploiting poor women.

Some even pointed out that the Ministry is contradicting itself for calling female porters “coolies”. Back in 2016, the Railway Ministry had announced that porters will no longer be called “coolies” because it is a derogatory term.

This is a disgrace. But instead of being ashamed of this primitive practice, our @RailMinIndia is proudly boasting of this exploitation of poor women to carry heavy head loads?! https://t.co/qPvqjBfarw

You are promoting occupational health hazards and glorifying it on helpless hard working women of this country.

This is a disgusting tweet. While it attempts to portray that women are equal to men,a host of questions remain unanswered: why are women being forced to work thus, and that too by a government agency? What prevents the Railways from giving them vehicles on which to haul luggage?

Instead of glorifying such harsh working conditions in 2020, you should work towards improving it. Have minimum sense what to do PR around.

Why can’t you provide trolleys for people to push their own luggage. Also provide battery operated vehicles for differently abled & elderly citizens. Humans carrying luggage of others for pittance is no empowerment

What the hell. Still humans are used for carrying luggages in Indian Railways? This is not a thing to be proud of.

and someone said we are a developed country! Developed country provides trolleys, electric vehicles. Only poor countries have people doing jobs which are health hazards without even proper gear. Nothing to be proud of. In fact, it is Sad!

This is wrong, not just for women, but men too. There are Porter services available all over the world. But they don't move luggage in such a crude manner. Basic problem is that Indian railways stations have stairs and not ramps, so you can't use trolleys like we do at airports. https://t.co/qYhjKS9laB

It's 2020 and coolies exist. This job should have been replaced ages ago. They deserve to do better jobs. https://t.co/TEvN21YuWy

1. Do NOT call them coolies. Call them Helpers.
2. Manual Lifting of other people's belongings is NOT an 'achievement'. You have to provide mechanized tools to alleviate their burden.
3. There is a LUGGAGE with WHEELS, but you still make her carry it:( https://t.co/JKxy31yVG1

Do you think authorities should arrange for other types of equipment so that instead of porters, passengers can carry their luggage as we do in airports? Tell us!