When the Covid-19 induced lockdown forced several people to remain locked inside their homes, the cases of domestic violence and abuse spiked. According to a report by Economic Times, 3,582 cases of domestic abuse was reported between April to June alone last year. And that excludes the innumerable number of cases that went unreported. Domestic abuse need not be only physical, but can also be mental. Mental harassment is also an acute problem and needs to be addressed.

For example, one woman took to Reddit to share her domestic abuse ordeal by her in-laws. Her allegations on how her in-laws treat her on a daily basis match the typical abuse that is faced by women in a patriarchal and regressive household.

“She (mother-in-law) and my father-in-law keep saying regressive things and complain about me not following her ‘rules’ (really stupid customs which are silly), keep harassing me (almost forced me to eat cow dung when I was pregnant until one of the relatives put a stop to it), outright say bad things about my parents. My husband is a very rational, honest man and whenever he stands up to his parents’ awful behaviour, my father-in-law accuses my parents of ‘brainwashing’ my husband.”

She went on to allege that her mother-in-law went as far as to use abusive words against her, and that’s when the woman decided that she has had enough. She threatened them with legal action and her husband asked them to leave the house.

“Last week, they crossed a line. My MIL abused me- gave me a literal ‘gaali’. I couldn’t bear it anymore and honestly, I am a self-respecting, independent woman, I shouldn’t HAVE to. I don’t want my daughter to grow up thinking that because you’re a woman you should tolerate this. I don’t want to live in this toxic environment anymore.” 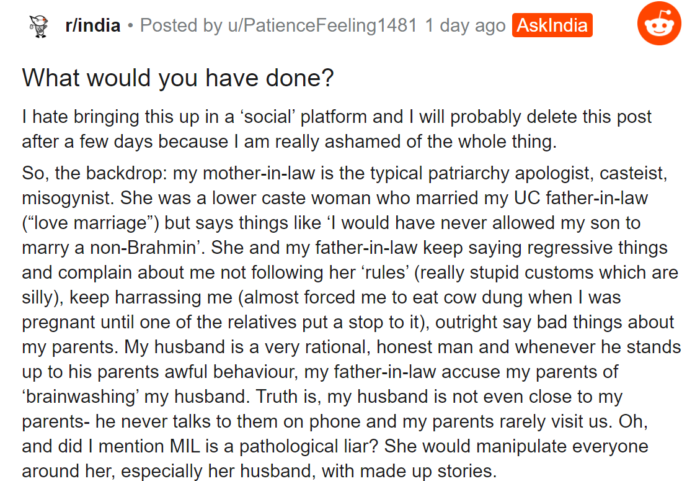 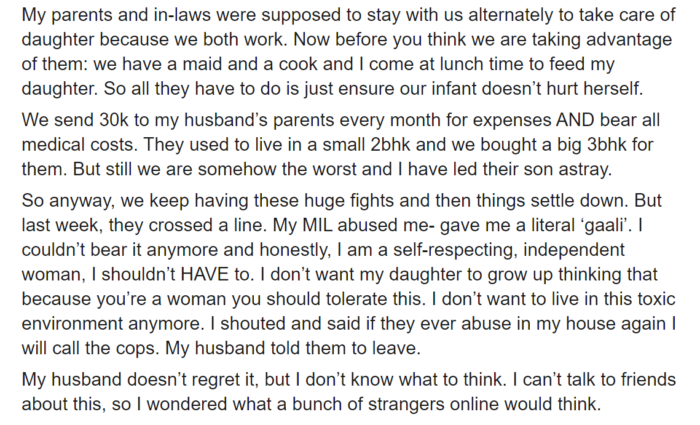 Responding to the post, people online extended their support to the woman. Many highlighted the importance of setting boundaries and expressed that she did the right thing by asking her in-laws to leave.

Innumerable women in our country face similar and worse kinds of abuse meted out by their in-laws on a daily basis. Way too many women choose to remain silent about it. Let this be an example for women to draw their boundaries and raise their voices when they are crossed.