Home Health This Mom Was Asked To Cover Up While Breastfeeding, So She Did…....

Of the infinite things that people get offended about, a mother breastfeeding her child in public would probably make the top 10. Okay, maybe the top 15. But you get my drift right? If you think of it, breastfeeding in the public is roughly equivalent to eating a meal in public, right?

And yet, breastfeeding is such a controversial act even now, that a model had to actually walk the runway feeding her baby to make a statement about it!

These two pictures might be my favorite ones of last weekend! There is more than one message that we all can take from these. One being, I hope to normalize breastfeeding because it’s a natural thing women can do for their babies. I think women should be able to feed their babies how they want, when they want and where they want. End of discussion! Another message I hope comes out of this is that women need to be confident in themselves no matter what. There is no one shape, size, age, or ethnicity that defines beauty. We are all beautiful! Look at the final 16 girls that were chosen. All different. All beautiful. Thank you @si_swimsuit and @mj_day for celebrating that year after year. Lastly, never give up on your dreams and goals, even when it may seem like there are many barriers in front of you at times. You are stronger than you think! We can do it all! So my #wcw today is every woman out there!!!! WOMEN CRUSH WEDNESDAY! 1st: @quinn_willoughby 2nd: @theimagesniper #girlpower #siswimsearch #normalizebreastfeeding #bodypositivity

Last week was World Breastfeeding Week (Aug 1 -7), an international event celebrating the simple act of feeding a new born baby. And yet, every year, when celebs and activists have tried to speak out in support of it, they’ve been trolled and slut-shamed.

I've gotten loads of posts asking about life after having my son… esp to do with weight and fitness. Seeing as it's World Breastfeeding Week- time to give some credit where credit is due. Breastfeeding has played such a big part in getting back into shape after giving birth to my baby. Breastfeeding has been challenging+time consuming (literally hours spent everyday trying to stimulate milk supply) but it's such a beautiful way to bond and connect with your child plus all the nutritional benefits that your child gets from your milk. Look out for my blog post on mycityforkids.com on breastfeeding. Happy #worldbreastfeedingweek

And yet, more and more celebrity mothers continue to embrace the idea of fighting the stigma surrounding breastfeeding in public.

Multi-tasking: level 💯 Cheers to all of the people helping working mothers get it done! 💪🏽 Special thanks to my crew past and present on @bravotopchef for your love & support #tbt #breastfeeding #mothersday

But what can the non-celeb, regular moms do to fight this ridiculous ‘shame’ that they’re supposed to feel when feeding their baby? Well, you may definitely take a cue out of this mom’s smartass tactic!

Carol Lockwood, a resident of Honolulu, Hawaii, shared on Facebook the story of how a friend’s daughter-in-law was asked to cover up when she was breastfeeding in a restaurant.

“It was a man who asked her to cover up, it was 90 degrees and extremely humid, and, no, she wasn’t in a Muslim country disrespecting traditions.”

But here’s where it gets hilarious yet empowering at the same time. Because guess what? The mom-in-question did cover up, just not what was expected of her! 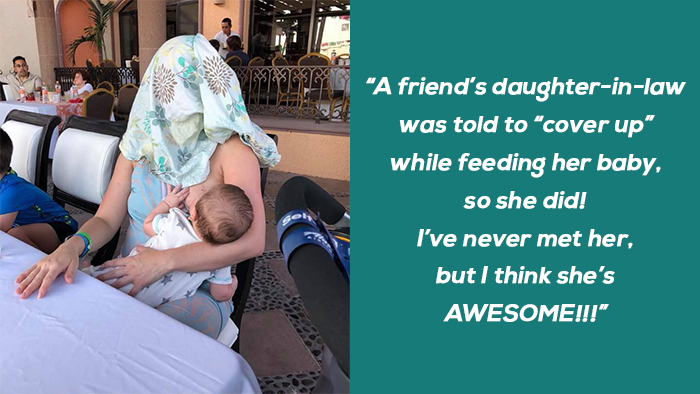 Well! Technically speaking, she did cover up!

Celebrating this mother for trumping her shamer with such a smartass loophole, Lockwood wrote in her FB post:

“I’m SO over people shaming women for nursing!”

People in the comments on her post were clearly cheering for the mother who gave the man what he asked for, and then some!

It’s amazing how women are being shamed for so many things on a daily basis and yet find creative ways to deal with their shamers! Only a woman can do!

Can you imagine sitting under a blanket and eating your dinner? No right? Well think of the baby!

Hey, it wasn’t all just women supporting the argument!

It’s going to be yet another uphill battle for women, in the grander scheme of the war that they’re already fighting. But you can always use a little humour to disarm your opponent from time to time!