Controlling Mom-In-Law, Silent Fiancé: Woman Narrates Why She Called Off Her Engagement

Living in a society which places immense importance on marriage, it is important to choose the right partner instead of marrying wrong and regretting it for the rest of your life. In my opinion, it is never too late to call off a marriage when your gut is screaming at you with an endless list of major red flags. Placing shame and the infamous ‘log kya kahenge’ mentality ahead of your happiness can prove to be costly. Thankfully, one woman made the right decision and called off her engagement when she realized it wasn’t a proper match.

Taking to Reddit under the subreddit r/India, one woman shared her story of being engaged to a man who wouldn’t take a stand for her while her would-be mother-in-law continued to insult and control her.

“I was dating a guy who I thought was everything I wanted in my life partner. His father passed away 2 years ago fighting cancer. I naively thought I would live with his mom temporarily to help her with the pain of being a widow. We got engaged and all the red flags started coming out,” she wrote.

She went on to add how her mother-in-law would try to control everything, starting from the wedding venue to her bridal shower.

“His mom started controlling the wedding. Even started criticizing my outfits. She wouldn’t let me cook because she doesn’t want to bother me. Even though I love cooking and willingly wanted to cook. It was her way of micromanaging. Every step of the wedding process she was sabotaging. From messing up invites to choosing everything on the menu. She was even controlling my bridal shower.”

However, her fiancé wouldn’t intervene and not call her mother out on behaving inappropriately.

“I would tell my ex this but he wouldn’t speak up. He hated confrontation and would try to be neutral. His mom asked where are we going on our honeymoon? I said we haven’t planned because I have my furniture in my apartment I would like to bring when I move in after marriage. She made a comment about whether I have cockroaches around my area. That’s when I lost it. My ex was sitting right there and didn’t shut her down. Instead the next day he says the problem isn’t about the comment his mom made. It’s because I have a tumultuous relationship with my mother hence I don’t like his mom. And he recommended I get therapy. I lost it right then and there.”

However, she did try to give him one last chance but in vain. Hence, she called off her engagement.

“I tried to give him one last chance. I told him after the wedding I need my own space. My own kitchen. I have been living alone for years. I can’t just sacrifice my privacy. And as a new couple, we need to build a nest together. He said that will never be his nest. His parents’ home is his forever nest. I took that as my sign to leave. I ended the engagement.”

What is heartbreaking is that the woman now has to start afresh. Now at the age of thirty, she had hoped that she would be settled and have her own children.

” Now I’m 30. I’m single. I had plans to have kids but most importantly a partner to do life with. I feel lost and alone. I’ve been estranged from my family. My friends are busy with their married lives. I just don’t know what else to do.” 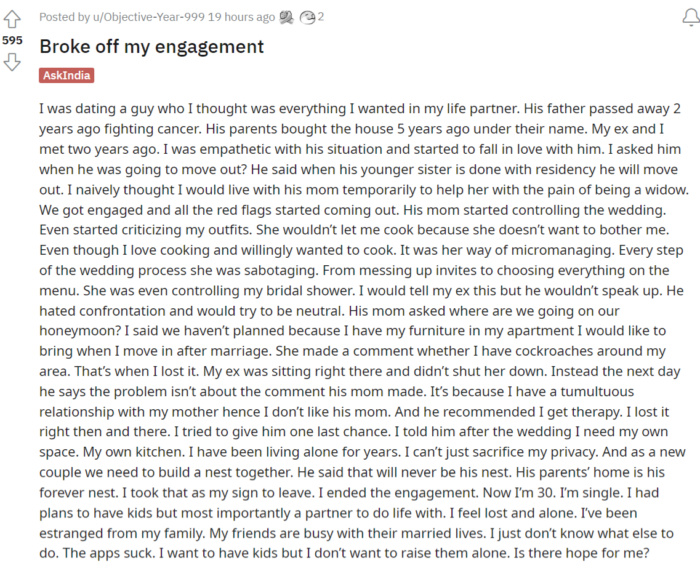 People online showered her with the most heartwarming advice. Imagine what would have happened if she actually got married into that family? Her entire life would have been controlled by her mother-in-law and her husband would have been unsupportive.

Sometimes, doing the right thing is painfully hard and takes a lot of courage to do so. Kudos to everyone who is looking at the greater good and making such tough decisions.