Even though cricket is not our national sport, it is one of the most loved one here. Cricketers are kept next to God and fans don’t skip watching any match. Hence, some special moments that happen during the matches remain etched in every fans’ heart. Remember Sourav Ganguly’s iconic celebration at Lord’s balcony?

Well, people are now talking about another iconic moment that was captured during India vs Australia 1st ODI at the Sydney Cricket Ground. 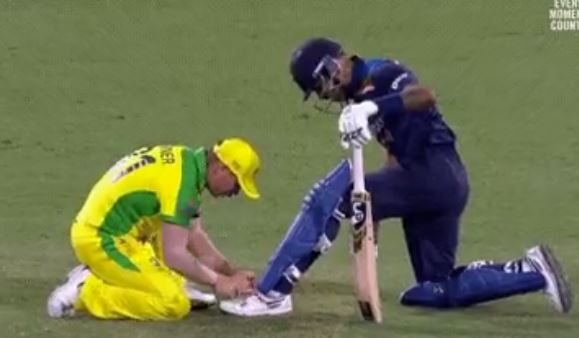 In a video that has been doing rounds on the internet, Australian cricketer David Warner was seen tying the shoelaces of Indian cricketer Hardik Pandya during India’s batting.

The video was extensively shared and Warner was lauded for his sweet gesture.

Helping each other makes the world a lovely place 😊

Such gestures prove that indeed it is a gentleman’s game💖💓

The spirit of Cricket!

Well, there was another moment that has desis loving Warner even more. The Australian cricketer, while fielding against India, danced to his favorite Indian Telugu-language song “Butta Bomma” on the ground as the crowd sang for him.

Watch this video wherein he originally grooved to the beats of the song with his wife.

Even though the players came down on the fields as opponents and rivals, that didn’t stop them from showing the brotherhood and compassion they have for each other. Probably this is why cricket is also called the gentlemen’s game after all.