Lately, all everyone wants, is to see ‘Winner Winner Chicken Dinner‘ flash on their screen. The cool gang knows what I mean 🙂 For the uninitiated, PlayerUnknown’s Battlegrounds or PUBG is a multi-player online shooting game. Players scavenge for weapons, body armour, health items, and backpacks. The ultimate goal is to be the last player standing. Hunger games style.

But it seems like a university in Tamil Nadu isn’t happy about the craze. A student from Vellore Institute of Technology (VIT) posted this on Reddit. 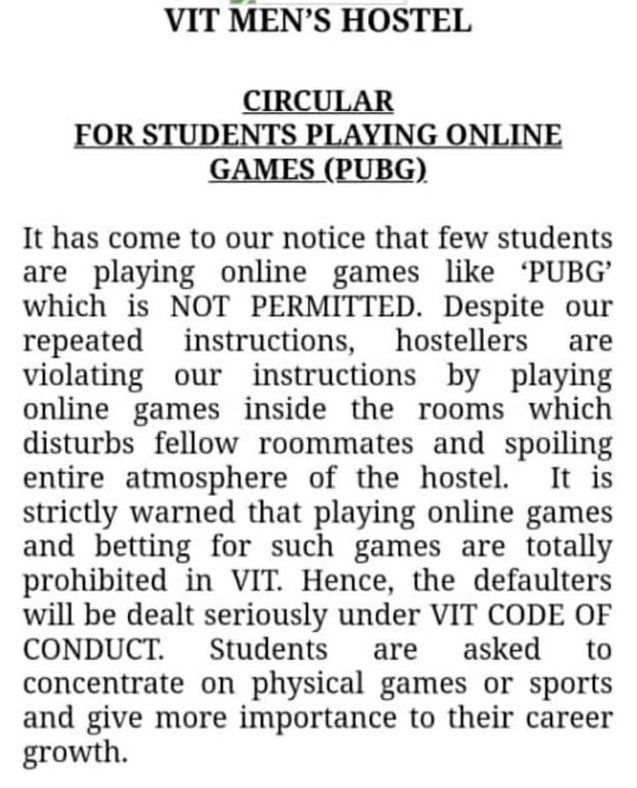 It is a circular by the Chief Warden of the Men’s Hostel. It expressly states that playing PUBG is prohibited. If caught, students may face punishment. Further, it encourages them to take up outdoor sports rather than online games.

For those who are shaking their head right now, thinking ‘Its JUST a game‘ – it is more popular than you know. It was nominated Best Mobile Game at The Game Awards 2018. A 2018 report by Sensor Tower claims it was the most downloaded game on Apple’s App Store in the first quarter. And among the top 5 most downloaded games on Android Google Play.

These are some of the reactions to the circular:

3. If you want to make something more desirable, label it as prohibited

Apparently VIT Vellore bans PUBG in hostels claiming impact on grades. This is called true dictatorship.😡😡 @PUBG @PLAYERUNKNOWN what do you say to that.

4. The other side of the story

Granted, gaming addictions are bad. Is a complete ban justified though? Tell us what you think.