Soon after, several celebs, including Priyanka Chopra and Madhuri Dixit, showered them with their love and blessings. 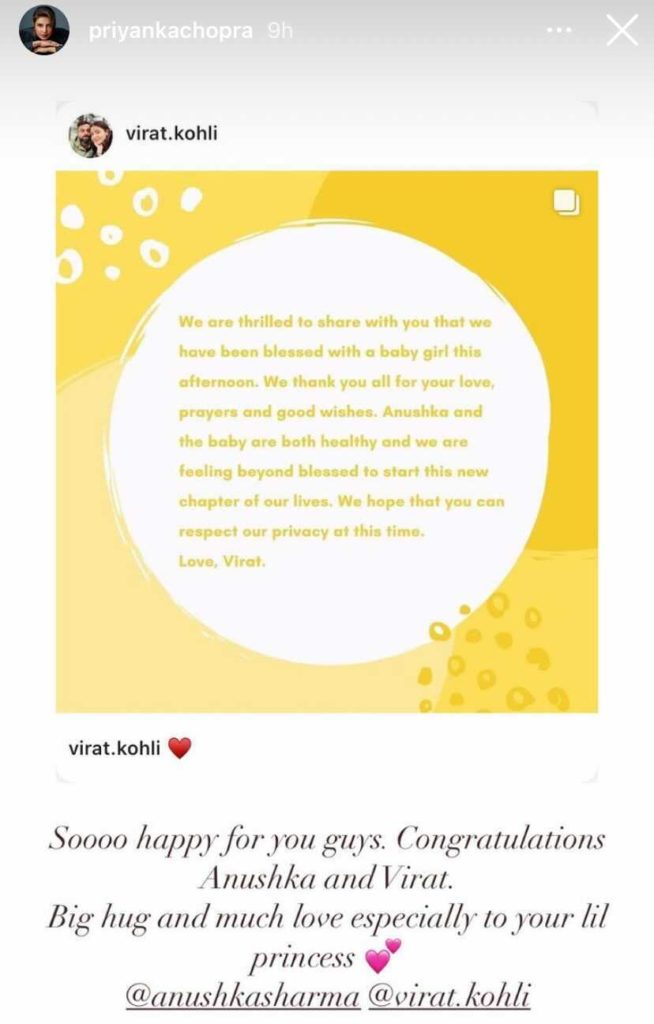 Congratulations @imVkohli @AnushkaSharma. May god shower his choicest blessings on you & your little angel 😘🤗 https://t.co/mVTlFSxtMm

Congratulations @imVkohli & @AnushkaSharma on the arrival of the little angel in your lives!

May her life be blessed with good health & love. https://t.co/AgPdz6HALM

Incredible feeling this. Congratulations to both of you. God bless. https://t.co/E6SRHcazyr

Many Congratulations @AnushkaSharma & @imVkohli – this is such great news!!! May god bless your family with great health, happiness & abundance of love. https://t.co/eFr9TEPpH2

While all of us were eagerly waiting to get a glimpse of the baby girl, Virat’s brother Vikas Kohli shared a picture of a baby’s toes that made everyone speculate if it was Anushka’s baby’s.

However, Vikas later clarified that the pic was a random picture and not the actual pic of the baby.

Since all eyes are on Virushka’s baby, there were some who couldn’t resist but wonder if Taimur Ali Khan’s, son of Kareena Kapoor and Saif Ali Khan, popularity was in danger.

Soon their concern took a hilarious turn as they started churning memes around it. Take a look:

After watching the popularity of #virushka #babygirl #ViratKohli

#virushka blessed with a baby girl
* Soon there will be photos of her all over the internet *
Taimur : pic.twitter.com/7H9HiMYhQl

Taimur trying to get attention of Reporters after Baby Kohli's news : pic.twitter.com/MpNCmFECSA

Meanwhile.. taimur, with whom nora fatehi wants to marry : pic.twitter.com/W9DiTfyPIT

Taimur Ali Khan after coming to know that @imVkohli and @AnushkaSharma had a girl 😌 #Congrats #Virushka pic.twitter.com/Cww8Jsqesp

Taimur has been the focus of paparazzi and shutterbugs ever since he was born. And that has also made him fodder for memes and trolls. Even though he might have some respite with the arrival of a new celebrity kid, we hope people don’t go all out and be harsh on the newborn.

Congratulations to the new parents.