Celebrated Indian wrestler Vinesh Phogat has on multiple occasions made the country proud by winning several accolades on multiple national and international platforms.

She received everyone’s love and appreciation when she became the first Indian woman wrestler to win gold in both Commonwealth and Asian Games.

But recently, the entire nation was shaken when the Indian wrestler came forward and spoke about being sexually harassed by coaches at camps that are meant to empower and train these sportspersons for future competitions.

“A player wants respect and with full dedication trains for the Olympics and other big competitions but if the federation doesn’t support them then they are discouraged. But now, we will not break. We will fight for our right,” reads her tweet.

According to a report by The Indian Express, Vinesh along with another acclaimed Indian wrestler Sakshi Malik alleged that several female wrestlers have been sexually harassed by coaches at national camps. The two also accused Wrestling Federation of India (WFI) President Brij Bhushan Sharan Singh of mishandling and sexually harassing wrestlers.

“A player puts their sweat and blood to earn a medal for the country but the federation has done nothing but lead us down. They are exploiting players by imposing unnecessary rules and regulations,” Sakshi Malik tweeted.

To protest on behalf of the women exploited, wrestlers Sakshi, Vinesh, and Bajrang Punia staged an unprecedented protest at Jantar Mantar in New Delhi yesterday against the Federation and Singh.

“Coaches are harassing women, and some coaches who are favorites of the federation misbehave with women coaches as well. They sexually harass girls. The WFI president has sexually harassed so many girls,” Wrestler Vinesh Phogat said.

Coaches are harassing women, and some coaches who are favourite of the federation misbehave with women coaches as well. They sexually harass girls. The WFI president has sexually harassed so many girls: Wrestler Vinesh Phogat pic.twitter.com/AqUetaXsGa

Phogat also reportedly said that Singh mentally tortured her after she lost at the Tokyo Olympics.

“He mentally tortures me for everything. To get anything (permissions), we have to beg. Some of the coaches appointed at national camps have been sexually harassing women wrestlers for years. The WFI president is also involved in sexual harassment.”

At the protest, Bajrang Punia stated, “Yesterday, Brijbhushan said even if one girl came forward saying she was sexually harassed I will hang myself. Yesterday, there were two such girls now there are five to six ready who have proof,” The Indian Express quoted him saying.

Delhi | I know about 10-20 accounts of sexual harassment faced by women wrestlers. Many coaches and referees have been involved. We will sit on protest until those guilty are not punished. No athlete will participate in any event: Wrestler Vinesh Phogat pic.twitter.com/uHpFs7fFN5

In a video shared on wrestler Sakshi Malik’s profile, Punia is seen asking all the wrestlers to come together and join them in the protest to protect the sport in India. 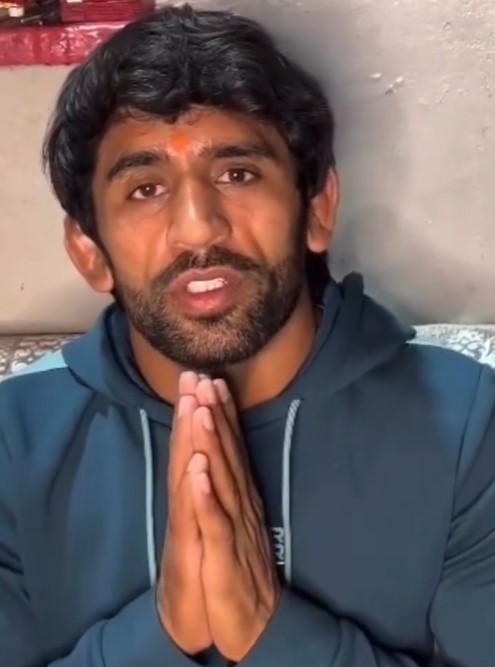 “You all know that we have staged a protest at Jantar Mantar. I would request all individuals from the wrestling fraternity that this is the fight to safeguard our game. Please stand with us.”

While Vinesh stated that she knows multiple women who have been harassed by the federation president including wrestlers from Kerala, Singh completely denied the allegations and said:

“There has been no incident of sexual harassment. If such a thing has happened, then I will hang myself,” Times Now quoted him saying.

I want to ask Vinesh Phogat, why did she wear a costume with a company's logo on it in the Olympics? After she lost the match, I only encouraged & motivated her: Brijbhushan Sharan Singh, President, Wrestling Federation of India pic.twitter.com/WDrsh2y3yK

However, she said that if the high court orders them to name names, they will.

“Don’t force us to come out with names but there are girls who are ready to talk. It will be unfortunate for the sport of wrestling if girls have to come out and give their names and speak about sexual harrasment.”

She also reportedly said, “We now have five to six girls who have come forward with evidence. Atma Samman (self-respect) is most important. If we are forced to bring the girls forward, it will be a disgrace for wrestling. If people like us can go through this, I can say with surety that no woman anywhere in India is safe. Women and daughters should just not be born in India.”

The Delhi Commission for Women’s chairperson, Swati Maliwal, also met with the wrestlers at the protest spot and issued notices seeking an investigation into the matter.

These are some serious allegations levied by the star wrestlers of the country. We hope the concerned authorities thoroughly investigate the matter to hold the culprits responsible.