Bollywood actor Saif Ali Khan has been out and about promoting his movie ‘Vikram Vedha’ wherein he stars alongside Hrithik Roshan. 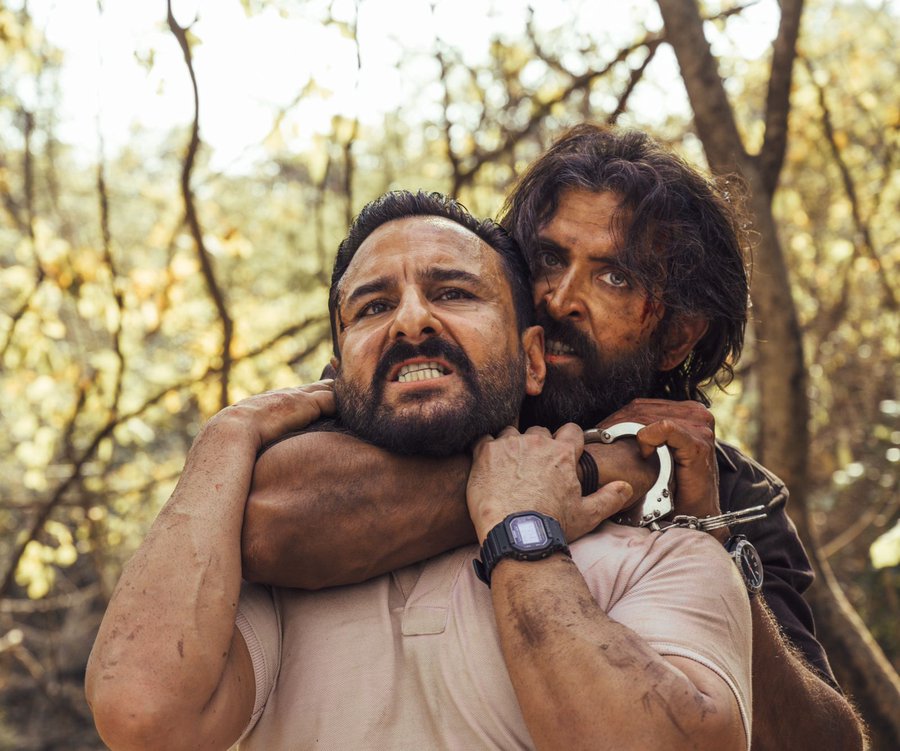 Well, people have a lot of expectations from the movie as it’s the remake of the 2017 Tamil film of the same name starring R Madhavan and Vijay Sethupathi in lead roles. Hence, when the movie was released, Twitter was flooded with people giving their reviews of it.

Film critics and reviewers called it ‘terrific’ and a ‘must-watch’.

A Milestone movie for @iHrithik He carries the movie on his shoulders.. 🔥 #SaifAliKhan is perfect..@radhika_apte is good..@SamCSmusic 's goosebumps BGM

Pushkar-Gayatri’s #VikramVedha, with Saif Ali Khan and Hrithik Roshan, is a smart action film that struggles when it tries to get philosophical

#VikramVedha hits it out of the park! Does full justice to its material. Explosive, entertaining, engaging. Airtight screenplay. #HrithikRoshan is a scene stealer. It's his best. #SaifAliKhan delivers a badass act. One of Bollywood's best two-hero film! @PushkarGayatri @iHrithik

#VikramVedha final thoughts: Saif & Hrithik are electric. Pushkar & Gayatri use their physical prowess to the MAXIMUM. The action & twists pack an equal amount of punch. Sharib Hashmi, Rohit Saraf, Yogita Bihani & the rest hold their own against the aforementioned acting titans. https://t.co/C1lCfc7die

Keeping that side, here is what the general public who saw the movie on the first day thought of it.

#VikramVedhaReview: #SaifAlikhan plays Vikram with unmatchable swag.He is so good at what he does.The confrontation scenes between him and #HrithikRoshan are easily the film’s best moments as they end in fireworks.
Someone please convince Saif to get himself more projects. pic.twitter.com/S9JpxcQ9XJ

Well crafted. A complete package of MASS and CLASS. Vikram Vedha has it all. This one is my best ever theatre experience till date. The whistling and hootings were louder than ever. #VikramVedhaReview pic.twitter.com/ldculpu8J6

Although, movie is all about violence and plot twists. Bohot Amazing hai

Just watched #VikramVedha .. Absolutely loved the movie.. Saif ali khan was really good but for me @iHrithik stole the show.. What a performance.. His aura on a big screen is something else man..So massy!!.. Background score was epic.. Congratulations to entire team😊 pic.twitter.com/kOfoe2Fbkl

Vikram Vedha review:
One word – Spectacular
The real hero here is the writing and brilliant direction by @PushkarGayatri. Its filled with lots of emotions and intense yet quirky scenes. Hrithik gives towering performance and Saif is just brilliant. 'Paisa wasool film hain yeh'.

#VikramVedhaReview-Just Watched This, And I Would Say If A Perfect Remake Exist Than It's None Other Than #VikramVedha – #PushkarGayatri What A Direction And #HrithikRoshan Was Mind-blowing In The Movie At The Other Side #SaifAliKhan Had Also Done A Good Job !!
Rating- 4.5 ⭐/5 pic.twitter.com/nksqBk5Fq6

#VikramVedha is both for Masses & Classes. Hrithik is breathing fire,he is just extraordinary.
Saif is excellent,but man #HrithikRoshan𓃵 just Killed it ,the swag,action, emotions were hitting differently.
Kudos to Directors.
Don't miss if your true HR fans.#VikramVedhaReview pic.twitter.com/CwhvgfIgnR

#VikramVedha a mass entertainer film!
Actions scenes are awesome.. Hrithik & saif FIRE on the big screen! 💥
i found it better than the original one.

#VikramVedha is an excellent movie like it's original, this one is more intense and gory.
Saif might have fall short of Madhavan but Hrithik has totally nailed it
Paisa-Vasool experience
It has everything for everyone
3.5/5*

The reviews are convincing. Would you watch the movie?