One such higher being is this woman who was caught doing a photoshoot of herself in a crowded metro. A video of the woman, Jessica Gorge, not missing a single pose to get the perfect selfie has gone viral and I’m glad it did! 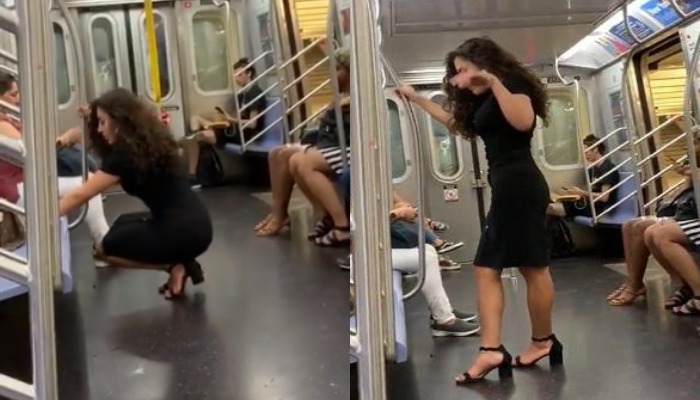 Jessica skillfully placed her phone on her seat, supported by her bag which served as a camera stand, and set it on selfie-timer. She then went on to strike different poses – sitting, standing, bending, playing with her hair – basically every pose that can make people go “wowzah”, all the while not giving a single damn about whether people were watching!

The video was taken by another passenger, who was clearly blown away by her confidence, and was posted on Twitter:

This woman giving it ALL to the selfie cam on the train is SENDING ME pic.twitter.com/i3JoSPKj3I

Not just him, the woman has managed to wow everyone who has seen the video and are now asking the Lord to lend some of the confidence that he has blessed her with!

To have the confidence to do this in front of others is powerful. I could never.

I'm completely focused on her touching that train seat and handlebar and then touching her face and hair. She braved bacteria for a solid selfie and that's the real story here.

when you find that good light pic.twitter.com/14UqzQ2thv

Honestly she is my new queen, I worship her and ONLY her!!

Is this what it’s like to NOT have social anxiety 😂

When he asks for pics but you’re on the train

Netizens were really curious about what the final product looked like.

I’m here for the final product?? Please supply photos below when you find her Twitter.

Serving AND Werking. I’m 100% here for her commitment to the craft. pic.twitter.com/xaianD5upw

When everything in my life is falling apart, but I can still control how much my selfie game slaps 😪💅🏽

In a generation filled with socially-awkward people, this surely is a breath of fresh air! You go, girl!