R Madhavan. Whenever we hear this name, we are instantly reminded of ‘Maddy’ from RHTDM. The man has made a huge name for himself in the film industry, has millions of fans, and seems to be ageing like fine wine. However, not Madhavan, but his son Vedaant has been dominating headlines for a while now. Here’s why.

16-year-old Vedaant Madhavan is no less than a sensation. In fact, he is a swimming champion who has won several medals nationally and internationally. Recently, he won as many as 7 medals, a remarkable feat, at the Junior National Aquatic Championships in Bengaluru where he represented Maharashtra. He brought back home with him 4 silver and 3 bronze medals, reports The Indian Express.

This isn’t the first time Vedaant has made his parents proud. Back in 2018, he won a medal for India at the International Swim Meet in Thailand.

In the same year in December, he won his first gold medal at the Nationals in the 100m freestyle category. In September 2019, be won a silver medal for India at the Asian Age Games. This year, in March, Vedaant won a bronze for India at the Latvian open qualifiers.

And just like a proud desi dad, Madhavan makes multiple posts about Vedaant’s achievements on social media. However, there’s one thing common in most of his posts – what a proud father he is and his desire to become more like his son.

“Thank you for beating me at almost everything I am good at and making me jealous yet, my heart swells with pride. I have to learn so much from you my boy,” Madhavan wrote in one of his posts.

A couple of celebrities and innumerable people online have been showering their love on Vedaant and have been calling him an “inspiration”. Music composer Ghibran took to Twitter to write, “Like father, like son.”

This phrase is so true – Like Father, Like Son!
Congratulation #VedaantMadhavan for winning 7 medals in the Jr. National Swimming Championships! @ActorMadhavan congratulations to you too😊 pic.twitter.com/5jtirIf5XC 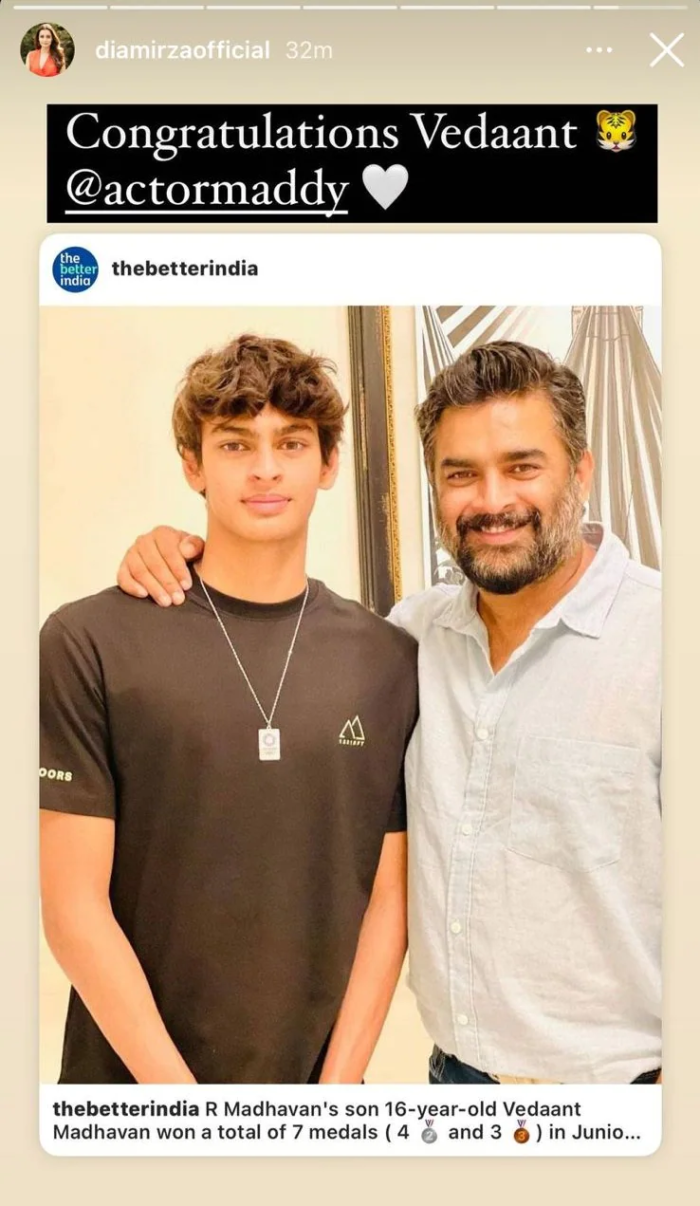 In March 2021, he won a Bronze medal for India 🇮🇳 at the Latvian Open Swimming Championship.

All actors are trying to get their sons into the movie field but @ActorMadhavan is making India as proud by his Son @vedaant_Madhavan By winning the medals in junior national swimming champion #Congratulations my dear brother hands off to Madhavan Sir 🙏🏻 pic.twitter.com/c0lc7AZ350

There are quite a few such artists/actors/actresses who know the best way for their children upbringing and what they should be treated like. Keeping them away from the fame and limelight, making them learn in the basic natural way. Congrats #Veedant and all the best.

Self made. Hard work and tasting the divine of victory . Proud of you mate. Lot more to go. Make India proud. 💪💪💪💪