Reporter Calls Out Man Who Sexually Assaulted Her On Live TV

Why do some men feel it is okay to touch a woman without her consent as if she were his property? Women ask questions like this every day to themselves as they come across incidents of public sexual assault and harassment daily. Nowadays with so many brutal incidents of rape and murder of women happening in the country, it becomes easy to assume that the world will probably never be a safe enough space for women.

Speaking of women facing sexual assault and harassment on an everyday basis, a US reporter was touched inappropriately by a runner while she was on live television covering a marathon. 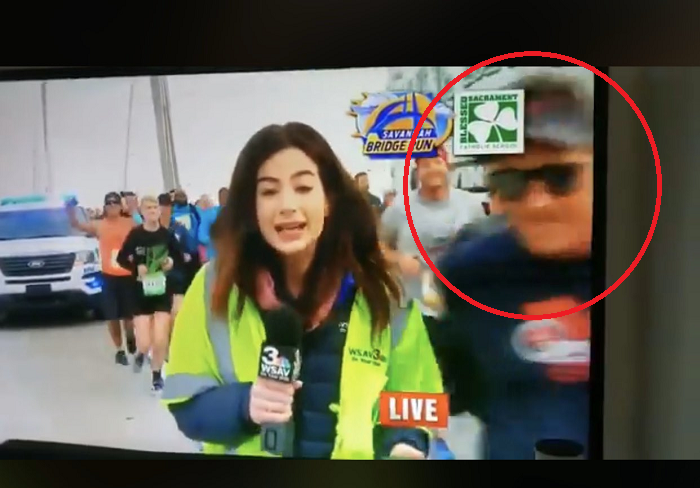 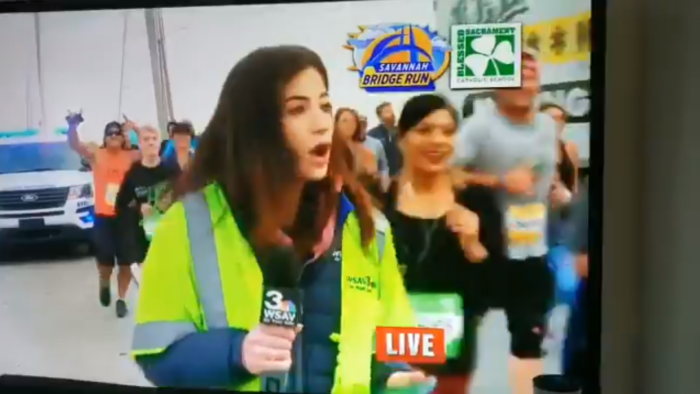 According to a report by The Indian Express, footage of the reporter, Alex Bozarjian who works for US television station WSAV, being “smacked on the butt” by a runner while she was covering the Savannah Bridge Run has gone viral on the internet. The video shows how the woman was left speechless for a few seconds after which she composed herself and continued with her reporting.

Check out this jerk smacking a @WSAV reporter's ass live on air. And sorry, that's my kiddo making horribly timed weird noises in the background. pic.twitter.com/6tzi6P1Jbo

The reporter later shared the video on Twitter and called out the man.

“To the man who smacked my butt on live TV this morning: You violated, objectified, and embarrassed me. No woman should EVER have to put up with this at work or anywhere! Do better.”

To the man who smacked my butt on live TV this morning: You violated, objectified, and embarrassed me. No woman should EVER have to put up with this at work or anywhere!! Do better. https://t.co/PRLXkBY5hn

People on Twitter have shown immense support to the reported and condemned the act of the man who thought it was okay to sexually assault a woman, especially on live TV, and thought he could get away with it.

The look on her face absolutely DESTROYED me. Really, really felt for her.

This made me very sad and I’m sorry this happened. Besides the obvious (sexual) assault aspect that should be taken seriously, it’s clear you had one of those awful moments where someone rudely makes you feel vulnerable or small but you have to continue what you were doing.

On behalf of all men, and particularly all men of Savannah past and present, I want to apologize for this pathetic incel beta male who is too timorous and insecure to treat a woman with the respect of an equal.

I hope you prosecute him. Men like this will never learn unless you make them pay for their actions.

A youth minister working with the Boy Scouts married and around two daughters.

I’m truly sorry this happened to you.

If someone is willing to do this on live camera then they should be willing to deal with the consequences. So sorry this happened to you.

Imagine what he does when it’s not on camera.

I’m sorry this happened to you. Myself and many other men are furious at this blatant violation and are hoping this creep faces justice. Please remember there are men that saw this as a violation of your person and we’re standing with you too.

Someone must know who he is.

I'm so sorry this happened. The look on your face and the way everything about you instantly changed is so familiar and awful

If we can see instantly how violating and upsetting this is, how come so many men can't & think it is still acceptable? pic.twitter.com/DqSTVWzh3d

@SavannahSports @SavPolice charge him. Don't just ban him from events. Arrest him, book him, and make sure there is a cost for hitting a woman. Call it assault, sexual harassment, or both. But hold him accountable because he clearly has no fear of the consequences.

I’ve been a male for coming on 59 years now. Never once done that. Have always known it is dead wrong. Have that putz banned. I didn’t have a dad for much of my life, but my rock star mother, may she Rest In Peace, taught me right from wrong.

Horrible this happened 2U! It's a terrible feeling that leaves U stuck in time 4A seconds! U composed urself quickly & professionally, even though U were still visibly disturbed! I'm glad ur assailant has been ousted! Hoping he's held accountable #sexualassault #ElVioladorEresTú

All the men who are writing this off as a bit of harmless fun: a) if the reporter was your daughter or wife you would, no doubt, feel differently (that’s territorial behaviour and negates a woman’s autonomy btw) so you do know it’s wrong b) it’s her ass. She decides if it’s “fun”

this. If a man thinks he can do this on regional news, he'll do it to any woman anywhere.

This is not the first time something like this is happening. Recently, a man tried to forcibly kiss a female reporter during an interview on live television. Even our own Neha Kakkar was forcibly kissed by an Indian Idol 11 contestant on live TV without her consent.

While many chant #NotAllMen, there are enough men out there whose sexual predatory tendencies scar the being of several women. While incidents like this don’t seem to stop, women need to speak out and take action immediately and set an example that one cannot get away with such behaviour.