Once Again, Urvashi Rautela Gets Called Out For Copying Captions, This Time From Zendaya

People copying someone else’s caption or quoting someone without acknowledgment is a common thing these days. But when you are in the public eye 24×7, you can’t afford to blatantly copy others and not give them credit. That’s because the social media police, like a hawk, is always looking for something to prey on.

And this time, it’s beauty queen and Bollywood actor Urvashi Rautela who got under the scanner of people online for posting a caption back in July 2021.

What happened is, Rautela posted a picture with a caption that is somewhat identical to what American actress and singer Zendaya posted in July 2020. 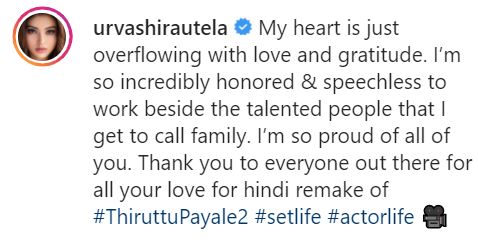 Well, it is hard to deny that both these posts have an uncanny resemblance. Now you know why people online were a little irked with Rautela.

As people online rightly pointed out, this isn’t the first time Urvashi copied a celeb’s caption. Earlier, she copy-pasted NY-based author’s tweet about ‘Parasite’. She was also labeled a ‘copycat’ when she lifted Gigi Hadid’s IG caption WORD-TO-WORD.

About time she gets a new social media manager or just works around emojis.