UP Cop Brutally Trashes 2 Labourers While Making Them Roll On The Road; Gets Suspended

Daily wage earners have been the worst hit during the lockdown. Not only are they walking thousands of km to just go back home but they are also facing severe hardships while doing so.

Recently, a police constable in Uttar Pradesh reportedly thrashed two labourers. He was sent to police lines after a video of him beating the two labourers in Hapur went viral on social media, reports The New Indian Express.

In UP's Hapur district, cops ask two men to roll on the road in the scorching heat near a railway crossing, dangerously close to railway tracks. This was the punishment for not wearing mask. @Uppolice pic.twitter.com/4fbGA4Q0b8

The workers, who were supposedly going to their respective homes, were made to roll on the road as well. The constable and a home guard thrashed the duo while they were rolling on the road at the Railway Lines. 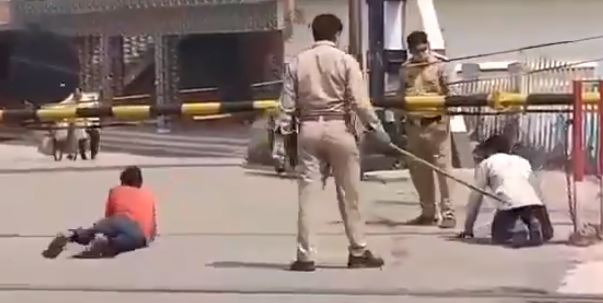 The case is now under investigation. During these testing times, a little empathy from law enforcement officers can go a long way. After all, police brutality is not acceptable at all. Well, we just hope the labourers are not hurt and are doing okay.