Shahrukh Khan’s 23-year-old son Aryan was booked by the NCB on October 2 and is awaiting bail following his arrest. However, a special Narcotics Drugs and Psychotropic Substances (NDPS) court recently rejected his bail plea. HT reports that they believe he was regularly indulging in “illicit drug activities” and may do it again if released.

While many celebrities have spoken in support of SRK and Aryan over the past few weeks, Twinkle Khanna too broke her silence on the issue. Taking to her Instagram handle, she compared Aryan’s drug case with the popular South Korean series ‘Squid Game’.

Speaking of the game of marbles from a Squid Game episode, she writes, “Each player is given ten marbles and must get their opponent’s marbles by competing in any game of their choosing. In this episode, one of the strongest candidates is badgered and ultimately bamboozled into losing his marbles. I seem to have misplaced mine as well when I read the news about Shah Rukh Khan’s son’s arrest”.

“While his friend was apparently carrying 6 gm of charas, there is reportedly no evidence of possession by Aryan Khan. Yet, the young boy has been languishing in Arthur Road jail for almost two weeks now,” she adds. 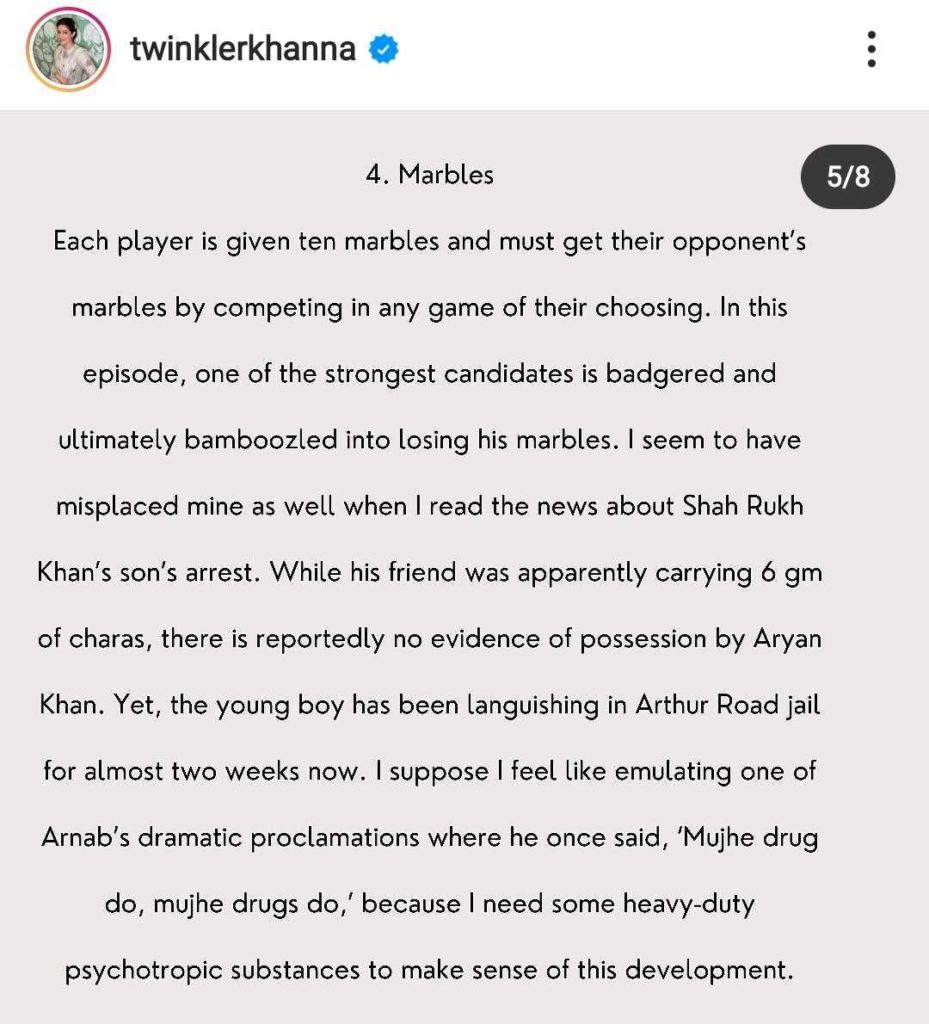 At the same time celebrities like Swara Bhasker, Rahul Dholakia and others questioned why Aryan was being held despite not being in possession of drugs at the time of the bust.

Stunning abdication of law.. by those charged with upholding the rule of law!#AryanKhanBail #AryanKhan #AryankhanDrugsCase

Outrageous !!! You are saying there is a “possible” connection to his “international” racket based on “WhatsApp” chat recovered from his phone, that you confiscated on a “bust” where he “had nothing” ?And you have been fishing for days and yet not found anything? #FreeAryanKhan

What has happened to our Judiciary system?Aam janta trusts our judiciary system as they are a neutral body and hence not supposed to be biased.This is harassment n a one sided opinion.There are so many other ways to interrogate, like house arrest,etc. why keep in Jail? #AryanKhan

Aryan khan’s bail rejected and it is clear harassment. How can a person remain in jail for more than 20 days, who was not in possession of drugs neither consumed. While Bharti Singh was given bail on the same day, who was having 86 gm drugs. Means 2 laws for 2 different people.

Reports reveal that Aryan had recently affirmed during a counselling session that upon his release, he would work for “social and financial uplift of the poor and downtrodden”. HT reports that his lawyers will plead Bombay high court to hear his bail plea on an urgent basis later today.