Disclaimer: This article contains visuals of sexual assault that might be disturbing for some. Viewer discretion advised.

In a shocking incident that was reported from Madhya Pradesh’s Alirajpur district, a tribal woman was sexually assaulted by a mob of men under broad daylight and in full public view. This occurred during the ongoing Bhagoria festival, reported The New Indian Express. 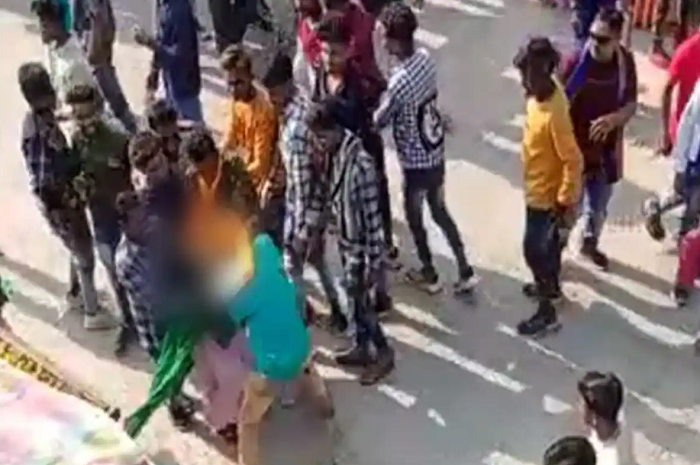 In a video of the incident that has gone viral, a woman is seen trying to hide behind a vehicle when a man approaches her and forces himself on her. Cries of the woman can be heard in the video. Even though she is rescued by a passerby who pulls the man away, another man heads towards her and sexually assaults her. He goes on to drag her towards the mob, many amongst which attempt to grope her, reported NDTV.

What’s even more disturbing is that in the same frame, another woman is sexually assaulted by the men. People who were witnessing the incident did not try to help the women or shun the incident. Instead, many filmed chose to film it.

This video is from MP, India. tribal Women being sexually harassed & assaulted in full public view. This is horrifying. Such women are subjected to this daily, because they belong to the oppressed section of the society, Tribal. #TribalLivesMatterpic.twitter.com/vUein71imK

An FIR has been lodged against the culprits and the two accused men have allegedly been arrested. Superintendent of Police, Alirajpur, Manoj Kumar Singh said, “After filing the FIR, two accused have been taken in custody but the main accused is missing, all of them have been identified. We have formed several teams and all of them will be arrested soon.”

According to TNIE, the accused men who were recording the video instead of helping the women have also been arrested.

Several people online expressed their disgust over the incident and called for appropriate action to be taken against the culprits. Here’s a look at some tweets:

This is so horribly barbaric. These men are animals. MP Govt must act to put an end to this debauched lawlessness https://t.co/4Spw2WB2JX

What the fuck is wrong with these guys??? Why and how the men are laughing at this???🙄 Seriously where are we heading to???? https://t.co/bkybemS2ok

Disgusting! I read some comments here… this is sooo unacceptable and people are talking about, caste, religion and politics… this is unacceptable. #Shame these guys must be punished https://t.co/SvDwiqmU7H

This is horrific. It is clearly so routine that nobody is objecting or helping…instead they are recording the attack on these helpless women!😡 https://t.co/q6YsKnCwdx

TRIGGER alert. This is unbelievable. That any woman would have to face this. Disgusting. @Anurag_Dwary reports that main accused still on the run, 2 arrested, even as all involved have been identified, claim police. https://t.co/iFIINnk8RI

In my limited and personal capacity I have raised this matter with the authorities in MP and requested them for action against the culprits.

However, am not sure if its proper to make this particular incident a tribal- non-tribal issue. Are you sure the culprits are non-tribal? https://t.co/D62gYja5qe

In the open street, in front of everyone's eyes, women are being molested! Just because they are tribal women? In an independent country like India? @WomenintheWorld #SaveOurWomen https://t.co/IWi5ZvoZl8

We hope that the accused are punished for their actions!