Although rainfall brought relief to some parts of the country, it has left many other areas waterlogged. Alas, rain Gods seem to be in no mood to stop. Roads in Gurugram were flooded and traffic came to a standstill after heavy downpour. Citizens avoided stepping out while it rained, but those who did had to face inconvenience due to traffic congestion and heavily flooded roads. Several people were also stranded in Gurugram’s waterlogged area.

But, amidst the flood-like situation, three compassionate Sikh men came to the rescue of a couple who were stranded in Gurugram’s waterlogged Mahipalpur area. The men, Jagjit, Satnam and Gurmeet saved the couple and helped them push their car to safety. A woman named Gurpreet Wasi spread the news of their act of kindness on her Facebook page.

In her post, she wrote how these complete strangers volunteered to help the couple, Rajeev and Shalini in the heavily flooded lanes while their car was close to getting submerged on the waterlogged streets.

Rajeev and his wife Shalini were returning home to Gurgaon when they got stuck in the mammoth downpour this evening at Mahipalpur. Their car nearly drowned and the engine died. The car got stuck right in the middle of water and while scores of people stood on the sidelines, laughing and watching, three Sikh boys came and helped them get out and escorted to a safe shelter. They later returned to push the car to higher ground even while it was raining crazy and water was waist-deep. Mind you, the water was full of filth. After a few hours of being stranded on the road, a rescue vehicle finally arrived and took the car away. Another Sikh gentleman dropped them home, it’s past midnight. Rajeev managed to click pics of two of these brave hearts. Whoever they are, if this post gets to them – so proud of you and you inspire. Delhi redeems itself sometimes!

The heartwarming post went viral with people applauding their selfless efforts to help the stranded couple:

Gurpreet and I are often (read: always) asked at every forum and every meeting what does Super Sikh Run mean and why… 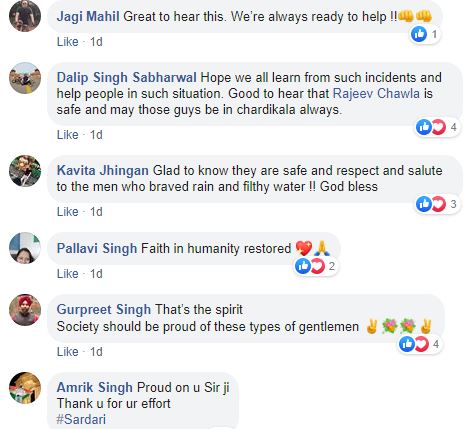 We are just glad that there are people who volunteer to help others in times of crisis. We are proud of you, guys!