Who doesn’t love puppies? They are basically a more adorable version of ‘doggos.’ Whether it’s a puppy with six legs or a puppy with a tail on its forehead, these fluffy little creatures will surely melt your heart.

And speaking of unique puppies, we recently came across a very special young one. Haywood County resident Shana Stamey’s family dog Gypsy gave birth to a healthy litter of eight puppies, reports News 18. Her three-hour labor went smoothly until the fourth puppy came out as a very colorful surprise. The little one had a mighty tuft of lime green fur.

Have a look at the green puppy:

Story tonight about a German Shepherd puppy born green just days ago in Canton. Animal experts say it happens from time to time, staining from birth fluids and not harmful, fades away. This pup's human family named him "Hulk. " More at 6. @WLOS_13 #LiveOnWLOS pic.twitter.com/7ex4i2wbOI 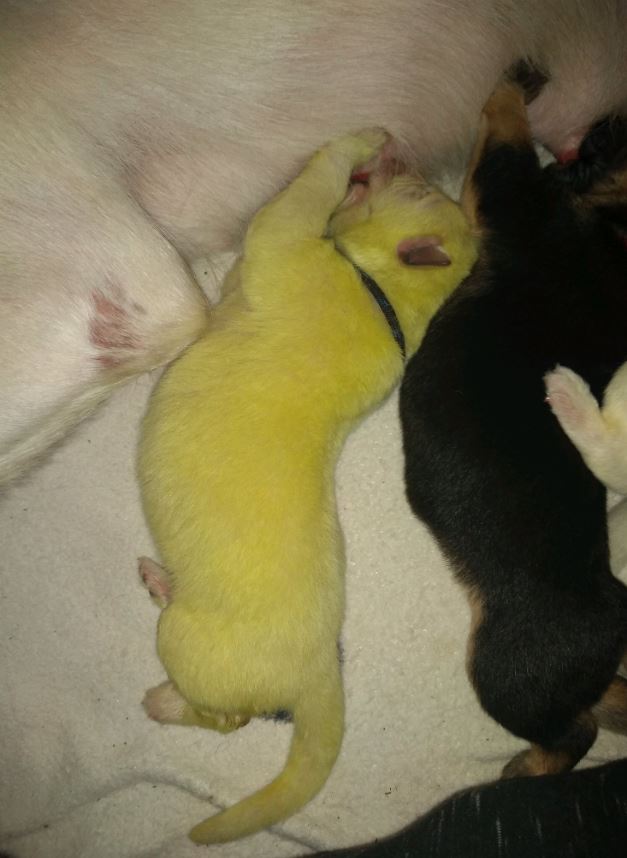 The logical explanation for the puppy’s coloration is that the liquid from inside the mother’s stomach stained the white dog’s fur during pregnancy. “The sack that they’re in when they’re in their mom, there can be meconium in there and that tends to stain them,” Junaluska Animal Hospital veterinarian technician Suzanne Cianciulli was quoted saying by ABC News.

While the amused owners came up with different names for the little green puppy, they zeroed down on Hulk due to its aggressive appetite.

The adorable baby ‘Hulk’ has left people confused about whether the puppy is green or yellow in color:

This happens so much to me where other people see green but I see yellow. Is it me or them that's off?

Some people suggested other innovative names for the puppy:

It would be criminal to not name this dog Elphaba

His name should be Lima Bean!
Or Pickle.0

i would’ve called him grinch

Should have called him Bart, that things yellow

i would’ve named him shrek

Hulk’s green color will eventually fade after regular baths and daily licks from Gypsy. What color do you think is the puppy, green or yellow? Let us know in the comments below.