When we generalise and categorise people on the basis of appearance while listing cultures, we unknowingly dictate how people from specific cultures should look like. In the process, we leave out a significant section of people who look differently. It is then when a dichotomy between the ‘self’ and the ‘other’ is established in the minds of people.

A brilliant example of this is a tweet that has been going viral on the internet. A woman went on to post a picture of a textbook showing representations of people belonging to different Indian cultures. These representations are, to a great extent, inaccurate.

So this is how a native Kannada people look in Karnataka. This is what kids are taught!
It's appalling! pic.twitter.com/NqztN61yPr

The chapter in the textbook talks about the various languages in India. Above the name of the language is a picture of a couple representing people who speak that language. A Hindi-speaking couple is represented as one wearing a saree (woman) and the other (man) being topless, wearing a dhoti, and having a ‘sikha’ (small lock of hair at the back of a shaven head). 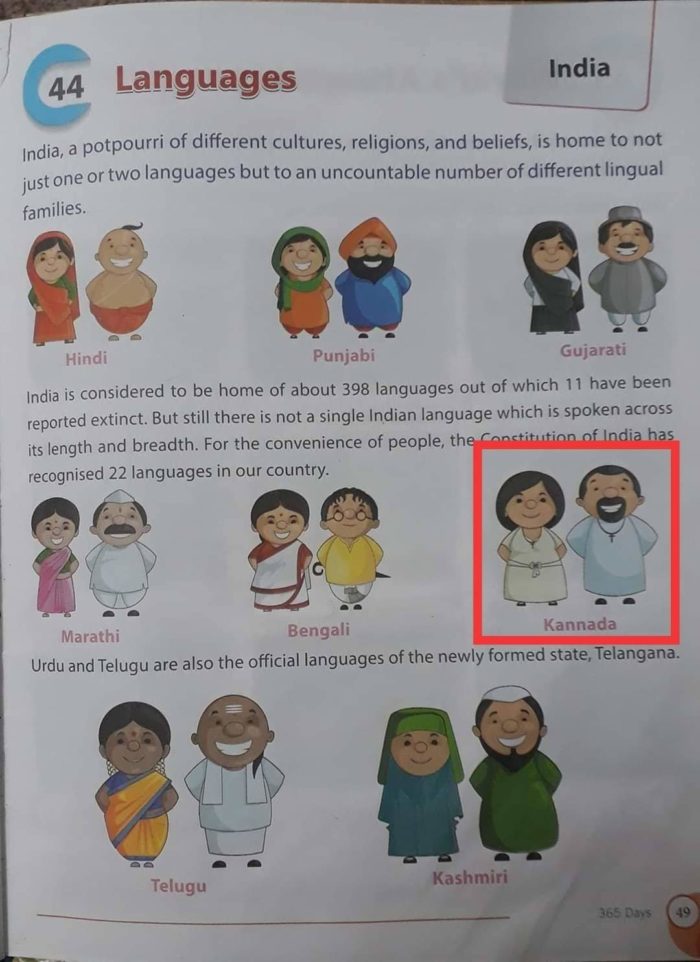 While it isn’t clear as to which textbook this is or which education board it belongs to, the thing that’s clear is that the chapter unhealthily stereotypes various cultures.

Which is why people on the internet are calling out the cultural misinterpretations. They also pointed out that teaching little kids such things is harmful. Have a look:

Why the do state boards/ edu. deptts/cbse allow such nonsensical drivel! https://t.co/tJWYfZUDub

Hindi, Punjabi, Gujarati and Kannada ladies have no bindi. Kannada uncle-aunty look like Parsis. Whoever designed this needs to expand their networks. https://t.co/OuU1iqCOsH

why is bengali guy not smiling?

And Kashmiri as only Muslims 😕

Why are telugu people so dark there..

Not all Hindi-speaking people are potbellied, dhoti-wearing pandits, nor are all Kashmiri-speaking people Muslims. It is a shame how kids are being conditioned into believing such stereotypes.