20 Tweets By Shah Rukh Khan That Are Dripping In Wit And Humour All At Once!

Shah Rukh Khan’s wit and humour IQ needs no introduction. His Twitter feed and interview quotes are testimonial to the fact that SRK is not only the ‘King’ of Bollywood, but also of intellectual acuity.

If you still are not convinced and need proof, then here are 20 tweets by Shah Rukh Khan that are dripping in sarcasm, wit and humour. 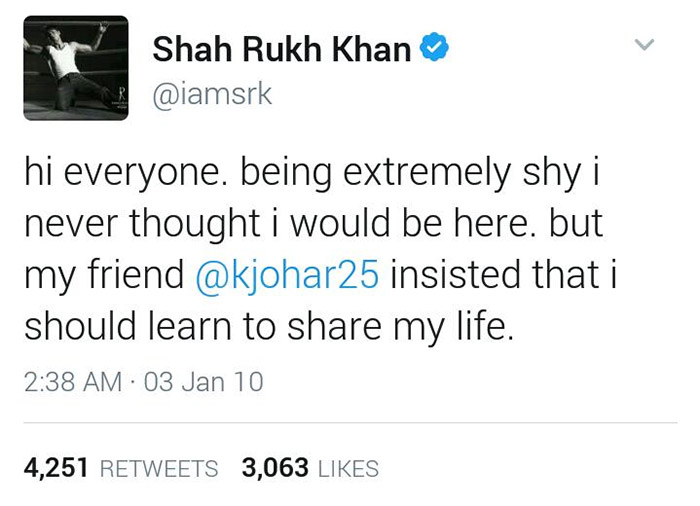 1. When someone asked for his mobile number on Twitter.

Of course and should I send you a photocopy of my Aadhar card also??? https://t.co/Qno5IeJMNK

@Ramlalla_nk I am analog he is on a digital scale

3. When he was invited to Washington.

@sarthakkher if I ask she won't go with you….ha ha.

5. That’s the secret of his energy.

sir what's the secret of your energy!?

6. This guy asked him about how much did ‘Raees’ collect on Pluto the planet.

7. Someone asked him how were his dimples!

My beautiful children without the masks they wear at the airports. pic.twitter.com/F0LAfswoxP

9. We’re looking at you Shah Rukh!

11. When a fan asked if he uses Snapchat or not.

Can't. I can be snappy or chatty not both at the same time. Naaahhhh… https://t.co/GQxPDq6Cbj

Hav 2 learn 2 ride a bike with aplomb. Just in case the boys (Aryan & AbRam ) want me to teach them. Ballet I already practiced for Suhana!!

13. When someone asked if he would marry her.

#asksrk will u marry me today ?

14. How many pocket tweets have you made?

Oops… The flip side of technology! First there were pocket calls. And now pocket tweets! Was a mistake…

15. ‘SRK’s Mexican Wife’ wanted to bite his lip. Here’s what he had to say to that proposition.

i want to bite your lips! can i?? #asksrk

I am such a Star!Even in sleep my pillow styles my hair so I wake up ready for the punk rock fest.From here 2 Utopia pic.twitter.com/TWhTfIYwah

Some days you get Dratini and others r like chai without cheeni…. pic.twitter.com/yAnyGyypSu

18. When he went for a cycle ride with Salman.

I c this trend in News where leaving of someone or something is headlined as Rexit or Brexit.So if I leave from sumwhere am I Sexit??

20. Back when he chopped his beard.

You’re too hot, you’re too cool, you’re SRK, you rule!