What do I say about King Khan that has not already been said? Should I talk about his romantic on-screen gestures or about his wit and humour off-screen? There are many things that make SRK who he is today, and I think one of the biggest for me, is his humility. He is always going out of his way for his fans and inspiring them to be a better version of themselves.

Because of his large fan following Shah Rukh Khan is rightly known as the Badshah of Bollywood. He is even highest followed Bolly star on Twitter. He has now reached another milestone recently of achieving a whopping 33 million followers on the micro-blogging site.

I mean if anyone deserves 33 million followers, it’s the king himself, don’t you agree?!

SRK took to Twitter to share his appreciation for the enormous number. He shared a minute long video along with the caption, “This didn’t go as planned…but on a lazy Sunday afternoon, with my limited floatation expertise..this is the best I could do! Judge nahi karna, feel karna…Thx.” 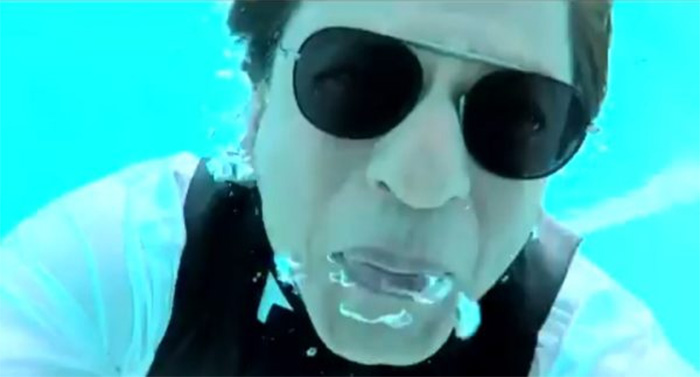 In the video, SRK looked dapper (when does he not though) in a tuxedo complete with a bow tie and all. And OMG did my heart just skip a beat?

Before jumping into the pool, he talks directly to his fans saying,

“Hi guys, this is me and I thought every time we reach a big number… I should always do something special for you but normally I do not get the time.”

He has he’s got the time now so he’s gelled his hair back and worn his “coolest, dark glasses” for the occasion. He said that he’s sending an “overwhelming, loving message that he’s given in the last decade. So listen to it carefully because this is very heartfelt.”

This didn’t go as planned…but on a lazy Sunday afternoon, with my limited floatation expertise..this is the best I could do! Judge nahi karna, feel karna…Thx. pic.twitter.com/50miTK7QKK

Fans of the superstar obviously lost their cool when they saw this and he was soon flooded with a sea of messages.

And a big kiss right back to you my angel 💋 Miss you pic.twitter.com/ygZTNyhKSi

5. Badshah and his fans, there’s too much love there.

I feel you Shah…I feel what’s behind the smile..the jokes…
You give us so much happiness my love. Throughout my life, during all of my struggles you have been my hope & strength. I hope some of us 33 Million & beyond can bring you a fraction of the happiness you give us ♥️ pic.twitter.com/NmuRVled6H

6. Ikr, nothing really does.

Haha sir this is so amazing. Congratulations on 33 million! Keep doing what you do! Nothing brings a smile to our faces just like you do 🙂❤️🙂

Congratulations SRK, for reaching the 33 million landmark and here’s to the 33 million more to join your fandom. Thank you for going out of your way for fans every time, you’re a real-life hero! And, if it’s not obvious even now, we love you Badshah. ❤