Let’s get the cat out of the bag- Sridevi passed away but it’s the Indian journalism that’s dead. To be very honest, sensationalism on primetime TV is no news for the Indian audiences but the way news channels chose rumour over reportage after the legendary actress passed away is just plain SICK!

Yes, while friends, fans and family are still reeling in pain after her untimely demise, the news coverage of her death only adds insult to injury.

If you’ve somehow, luckily missed the media trials the ‘Breaking’ update on the tragedy is that perhaps Sridevi died of accidental drowning in her own bathtub and not cardiac arrest.

Khaleej Times has exclusively obtained a copy of #Sridevi's death certificate that confirms the cause of death as 'accidental drowning'. She did not suffer a cardiac arrest. EXCLUSIVE details – https://t.co/STLXW5y2VI pic.twitter.com/NcGm6g4oVU

And that was the cue. What followed was a tirade, a circus of gossip-mongers who took turns in posing as forensic experts, doctors, investigators and what not!  Not only did the vulture media gave bizarre conspiracy infused twists to Sridevi’s death but they even went ahead and actually built a chroma-created bathroom to prove their frivolous point!

These are only a few samples of ‘tributes’ to the iconic superstar by channels. 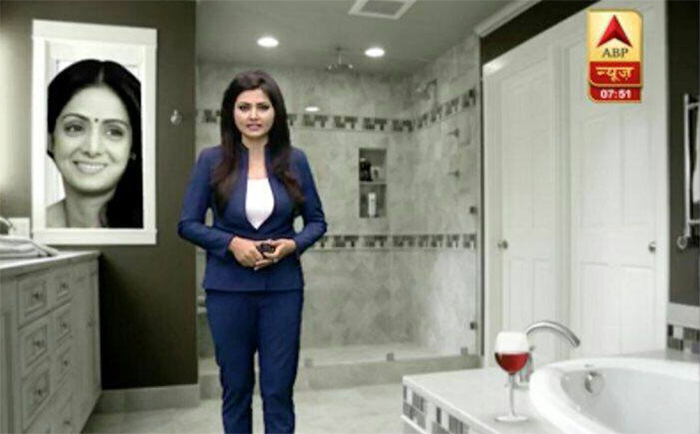 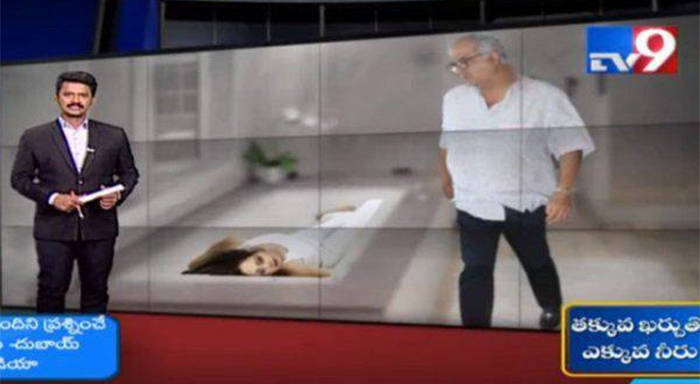 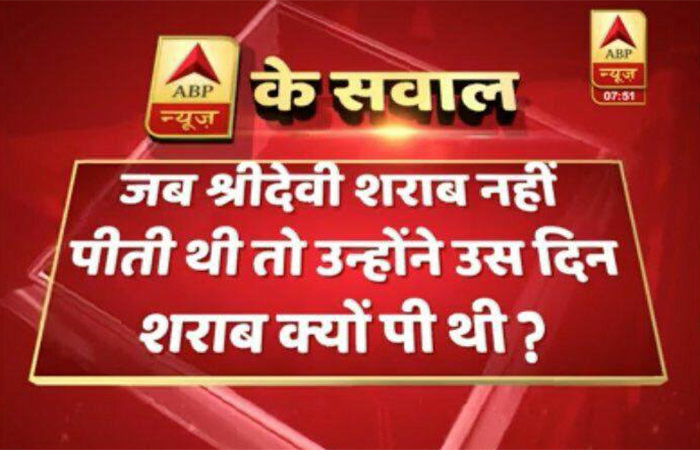 6. The investigations are on! 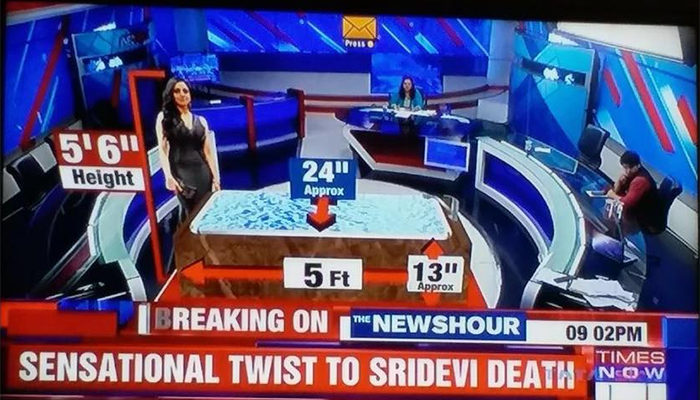 Needless to say, it has left a lot of people upset and angry.

Recently, actress Renuka Shahane took to Facebook, requesting the media to let her rest in peace.

Dear News Channels, please allow Srideviji’s soul to rest in peace.
Please allow her family, friends & fans to grieve in peace. Imagine if it was your family member! Would you like a dissection like this about your loved one? Please have a modicum of respect for one who has passed.

There is a thin line between news and salacious gossip. Do not be so disgusting. And all those writing Facebook posts with great concerns about “health” issues and other “cosmetic changes” that could be detrimental for health; would it be possible for you to wait at least for some time before passing judgement and giving unsolicited advice? Discuss it among your family and friends if it is that important to you. Live your lives the way you want to but let others live their lives the way they choose to and for heaven’s sake, let them be in peace after they have passed away.

And she is not the only one.

The entire Internet is up against the wall, condemning and calling out the media channels for their insensitive parade of distorted facts.

Sridevi may have died due to Accidental Drowning, but Indian Media should drown voluntarily. Chullu bhar paani mein.

2. How does one come up with this?

One anchor is in "the" bathroom, complete with a wine glass! Wow! Excuse me while I step out to bang my head against a wall. BRB. pic.twitter.com/XTdLNI2ckO

3. This is the sad state of Indian journalism!

ARE YOU FUCKING SHITTING ME?!

May they let you rest in peace…. pic.twitter.com/stoWljWkbf

Rotten analysis of #Sridevi ‘s passing away by our disgraceful media. TRP hungry morons. Please let her soul rest and celebrate her contributions, instead of turning this into a media circus.

7. Is this any way to report a death?

There’s no bottom in the barrel of the graceless.

And not for the first time, Indian news channels are now forensic experts, doctors and sleuths based on zero hard info . We don't let people live in peace, we won't let them die either! #Sridevi

9. Sickening is the word.

It's sickening how TV anchors are justifying their tasteless speculation of Sridevi's death by saying it's in the 'public interest'.

Dont know which is a bigger tragerdy. #sridevi passing away or the mad feeding frenzy of it by the media.. heart goes out to boney sahab i hope hes ok 🙏

I just hate what you are doing to Sridevi's memory. You rotten bastards.

From calling Sridevi a legend yesterday to calling her a bewdi today, Indian media channels sure know how to turn things around in a day.

“What does sridevi’s death tell us about the lifestyle you and I lead “… this coverage just getting worse ! 😳

Think TV channels and tweeps can safely leave the job of investigating Sridevi's death on police. They'll do it better

Everyone is aware of the tactics employed by news channels to ace the TRP race but whatever happened to journalistic ethics?! It’s disappointing, to say the least.