While posting anything online, we ought to be careful because as they say, the internet never forgets. And if you’re a celeb as big as former Indian cricketer Sourav Ganguly, you definitely have scores of eyes on you.

But recently, Dada became the butt of jokes after his copy-paste blunder ruined the promotional stunt of an e-commerce platform ‘Meesho’.

Apparently, the brand roped in several well-known celebs from different industries to launch something exciting and a ‘blockbuster’.

This is precisely why you might have seen celebs like Sourav Ganguly, Deepika Padukone, Rashmika Mandanna, comedian Kapil Sharma and Rohit Sharma among others share a poster with their pic on them that read ‘Mega blockbuster, trailer releases 4th September’.

However, Sourav Ganguly and his social media team popped the bubble and killed the build-up.

Evidently, Meesho’s team might have given the post copy to Dada’s social media team that they just had to copy and paste as a caption while sharing the creative on his Instagram handle.

But they did it like a careless two-year-old and just pasted the entire text the company had shared with him including the disclaimer that was only for them.

“Please ensure that Meesho brand name or Meesho hashtag is NOWHERE mentioned in the September 1 post.”

Although Dada took down the post immediately after posting the wrong caption, the screengrab of this blunder had, by then, spread like wildfire online. 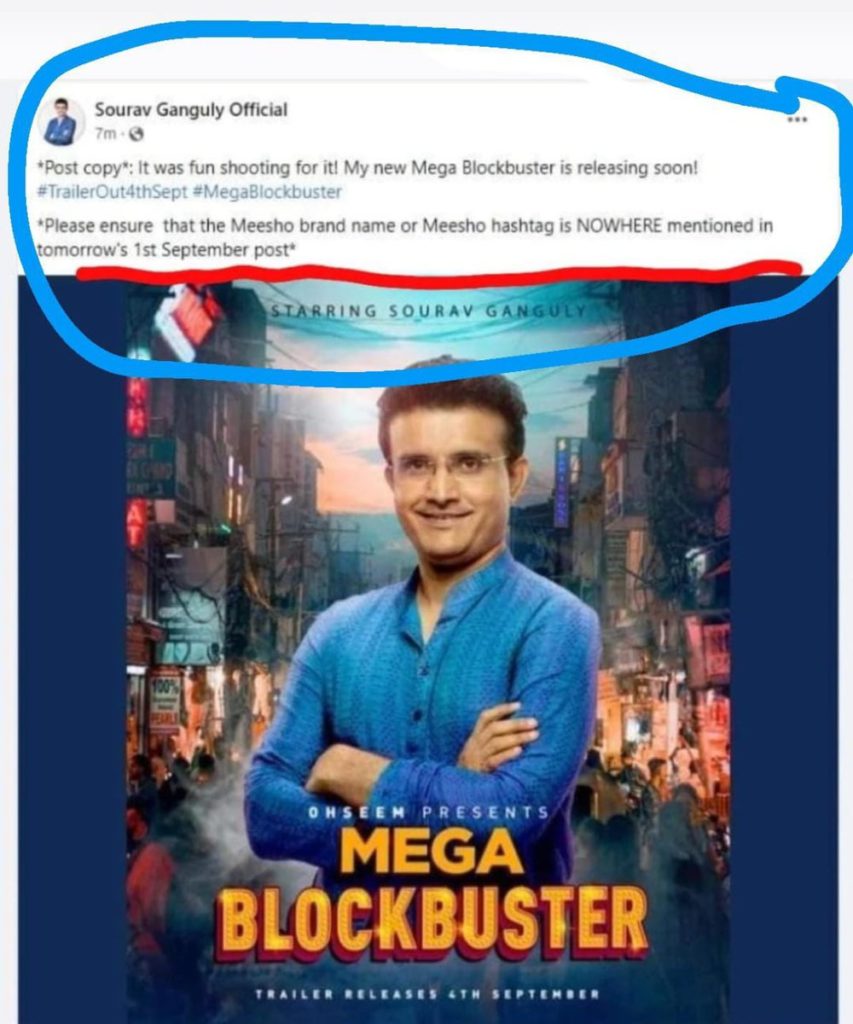 And then, people had a good laugh pointing out how Dada ruined the fun for the brand.

The "Mega Blockbuster" campaign being posted by many celebrities belongs to @Meesho_Official. Ruined by Ganguly's social media team. Welp! pic.twitter.com/eiEqAomEA9

It's not a mistake ig but it's a way of doing marketing.

If that's the case then well done Meesho. pic.twitter.com/AGTcgU6NNy

This is the funniest thing I saw today 🫣#Meesho #SouravGanguly pic.twitter.com/XVZoT6Hzdl

If that wasn’t intended, guys at Meesho might have gotten a mini-heart attack on watching Dada’s OG post with the blunder.