Behti hawa sa tha woh… This song makes us all think about Phunsuk Wangdu from the movie ‘3 Idiots’. By now, all of us know that the character of Phunsuk Wangdu is based on a real person named Sonam Wangchuk. The character still has a place in our hearts despite the movie completing 6 years, and so does Sonam Wangchuk. The man is far from concluding his journey of educating the world, with his intellectual prowess.

Remember how he created Ice Stupas and won a Global Award for his innovative step to save water? Yes, the man believes in sharing his knowledge and lately, he has been doing the same by striving to make Ladakh a well-connected place instead of a distant exotic dream. Connectivity in Ladakh has always been an issue of grave concern and from the looks of it, he is slowly succeeding in achieving his goal.

In a Facebook post, he wrote about how he addressed 250 students from Ladakh this Sunday, on video-conference for the first time. This was a huge step in his feat of trying to make Ladakh a place without connectivity issues. 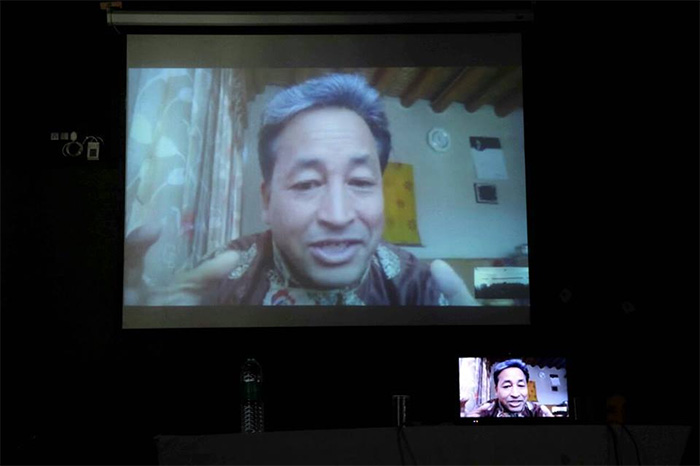 He also addressed how the Internet was a double-edged sword and while there are a lot of trolls who will dampen your day, there is nothing a responsible usage of the luxury cannot solve. Thanking Airtel 4G for their seamless network, he wrote,

DIGITAL LADAKH A REALITY… BUT
Join me in a live web seminar from Ladakh…This Sunday was very special for me. It was perhaps the first time ever that a person in Ladakh addressed a live seminar in another city using video-conferencing over public internet. I spoke to some 250 Ladakhi students who were sitting in an auditorium in Chandigarh in a seminar organised by Ladakh Students Association there. I am so happy that it worked out fine with only minor glitches. After that yesterday I again did a web seminar with few hundred students in VNIT Engineering college Nagpur…

I want to thank Airtel 4G for making this a reality in Ladakh.

The internet is the ultimate equaliser and this incident proves beyond doubt that democratic access to data on the world wide web gives every Indian (and beyond) the opportunity to listen, learn and get inspired by everyone’s favorite educator and inventor, Sonam Wangchuk. Live from Ladakh!

Guess, now we have to tune in to learn a little bit of Ladakhi so we can soak in the knowledge of Mr. Wangchuk. After all, he is one of the Chatur ones out there!