A couple of days ago, a woman shared an optical illusion picture on social media and successfully baffled puzzlers. Although it gave us a headache, I felt that such brainteasers are a good way to keep our minds engaged during the lockdown.

So, we went back to scrolling our social media feeds and found a picture that has left us scratching our heads. We found footage that showed a ship floating in the air above the sea. No, it’s not a scene from an animation or a fiction movie, but it happened IRL. 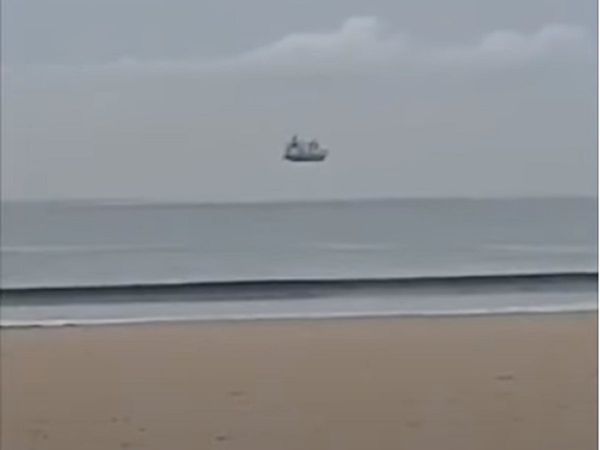 According to Times Now, Monika Shaffner spotted the rare sight when she was walking by Mount Maunganui in New Zealand. She was quick to film the unusual sight of a ship seemingly hovering in the air.

Well, we couldn’t believe our eyes. Hence, we did some research and found out that the optical illusion is actually a common sight in the sea.

According to Mail Online, the unusual phenomenon is caused by the alteration in atmospheric pressure. As per scientists, ‘the mirages appear when a layer of warm air sits on top of a layer of cold air, causing the light from the ship to bend as it passes through gaps in air currents.’

A Fata Morgana may be seen on land or at sea, in polar regions, or in deserts. This unique form of mirage may involve almost any kind of distant object, including boats, islands, and the coastline. pic.twitter.com/YsytyIAgEq

The bizarre sight can be seen where the sun sets over the ocean, or can also be observed in the deserts. Apparently, such an illusionary sight is known as ‘Fata Morgana’ that is caused when the sun heats up the atmosphere above the land or oceans.

Here are some more visuals of such a rare phenomenon.

A fine example of a Fata Morgana, a mirage caused by changes in temperature which bends rays of light. pic.twitter.com/Ro6gZErfRt

Another shot of the Chicago Fata Morgana. At a distance of 60km, the city skyline, or most of it should have been the other side of the Earth's curve.

A stunning 'fata morgana' forming out over The Minch this morning. This is Eilean Trodday, off the north tip of Skye, with South Harris, behind, looking eery and quite other-worldly. pic.twitter.com/hBuncN8YZ6

And still the fata morgana teases, plays games with our view of Isle of Harris, long after sunset. Nature will always have the upper hand. pic.twitter.com/hLYGQMB2uW

Well, I would have freaked out at the sight of a floating ship. But, good to know that it’s not some witchcraft, but plain science.

Soha Explains The Importance Of Fans’ Role In Making Sure Actors...