A year ago, when Chennai Super Kings took on the Sunrisers Hyderabad in the IPL final 2018, veteran Aussie batsman, Shane Watson’s unbeaten knock of 117 runs earned MS Dhoni and his men the coveted trophy. Come 2019, despite Chennai losing in the finals, Watson turned out to be the hero for the men in yellow once again.

The 37-year-old almost pulled off a sensational victory for the Super Kings this year too, but unfortunately was run out at a score 80. However, an incident which has come to light about the power-hitter will make you respect the cricketer even more.

Legendary Indian off-spinner and Watson’s Chennai teammate, Harbhajan Singh, went on to share a picture of Watson from the final against Mumbai Indians. The picture showed the Aussie batting with a bleeding knee and a large area of his pant covered in blood.

Harbhajan added that the man had cut his knee while diving during his innings but continued to bat for his team without letting anyone know. The story read,

“Can you guys see the blood on his knee…he got 6 stitches after the game..got injured while diving but continue to bat without telling anyone. That’s our @srwatson33 Almost pulled it off for us last night.”

Watson also had to bear the pain of six stitches after the match to stop the blood flow. 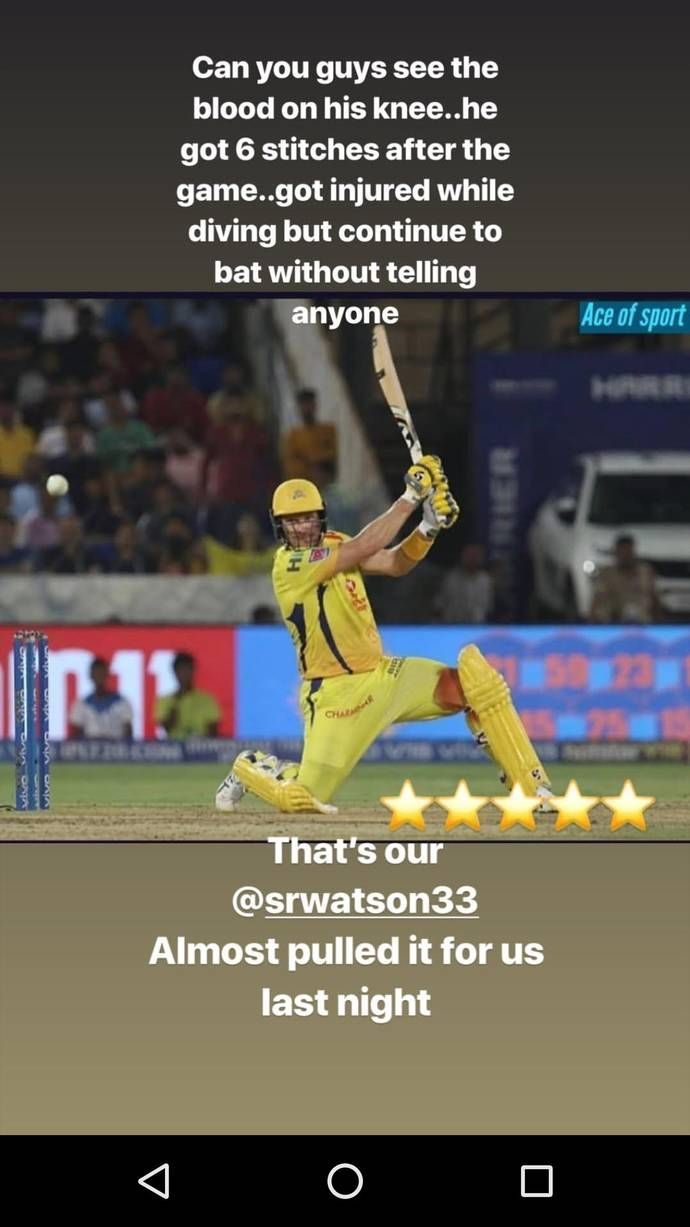 The post went viral in no time with people hailing the superstar for his incredible dedication and class.

Whatever this man did last n8 was beyond! I mean Watson played a knock that will be remembered! The blood from his knees …. 😭 …… Sometimes winning is not about the trophies it's about the heart and the soul and the blood that flows💓 #ShaneWatson 🔥 @ShaneRWatson33 pic.twitter.com/hrm3vxaIoT

That Faith From MSD & CSK Fans On Watson.. While he not well over d Season.. He Replied With tha bloody knee injury during play..! What a man.. He was… @ShaneRWatson33 u deserved it man… Bigggg Respect for u.. Waiting ur Innings next year with a bang 🙏

Shane Watson. The ultimate hero. Who showed the world the color of blood can be yellow. God bless you #Watto You are a superhero. @ShaneRWatson33 Proud and honored that you are #CSK. #yellove #ChennaiSuperKings #IPL #ShaneWatson pic.twitter.com/pgpmmalKTA

Shane Watson batting in the IPL Final with blood on his knees, had 6 stitches after the game but went about his business on the field without anybody knowing about what he was going through physically.

IPL is not fixed. These guys don't play only for the money.

This is how you set examples for the next generation who are Watching the sport. Every action was by choice, not by chance. Take a bow @ShaneRWatson33.

Harbhajan Singh revealed that Shane Watson batted with the bleeding knee even without telling anyone and almost won the game for CSK in finals. He got six stitches after the game.

Sums up the dedication!

Respect for Shane Watson has gone beyond roof. His left knee seems to be badly injured with blood flowing out. He still batted and dived in the last over. Admirable from Watto to put his body on line at 38 after suffering from injuries throughout his career 👏👏 pic.twitter.com/4yqeGoubk4

When he got run out thought it was a easy two. Now got to know he has batted with the bleeding knee… Massive respect champion 💛 pic.twitter.com/7lcLMtWKbi

Not all heroes wear capes and Watson is definitely one of them!