The country was incredibly angry when Chandigarh BJP vice-president, Ramveer Bhatti, victim shamed Varnika Kundu after the whole Chandigarh stalking case blew out of proportion. By blaming the victim for venturing out alone in the night, he not only gave a glimpse of how regressive the thinking of our society is but also showed that women become the soft targets in order to safeguard the big political names (or their sons).

But, the situation got worse.

After the victim, Varnika Kundu, revealed her identity to the public, an old picture of her along with two men got circulated all over the social media.

The trolls who shared the picture claimed that the two men in the photo were Vikas Barala (son of Haryana BJP chief Subhash Barala) and Ashish Kumar, the men who actually stalked her. Shamers were suggesting that she had friendly relations with them. 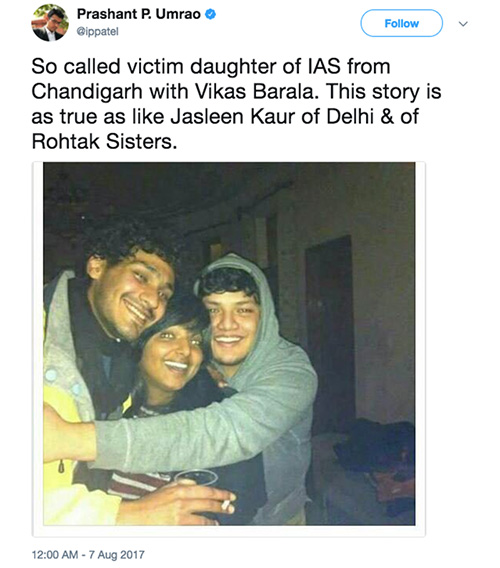 Not so long after the picture went viral, Bharatiya Janata Party (BJP) spokesperson, Shaina NC, shared the image by tagging Varnika as ‘so called victim beti’. 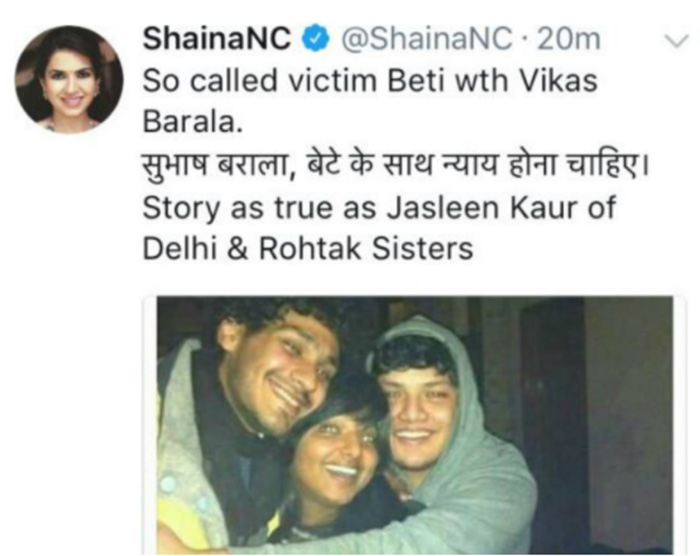 Varnika Kundu later gave a statement saying that the picture is very old and the two men in it are not the accused, as reported by India Today. (Not that it matters if it were them. Being a friend doesn’t give you an excuse to stalk anyone.)

Even though she deleted the tweet after the truth came out in the open, Shaina received a lot of flak from social media. Here are some of the reactions.

The tweet that @ShainaNC deleted. Don’t delete and run away Shaina, as a party spokesperson pls explain pic.twitter.com/Ocf5fycwuN

Stalking is stalking. By friends or by strangers.

Dear Shaina, this is not your party’s #Barala. You’ve fallen for a Bjp photo shop & for heavens sake as a woman you are justifying stalking? https://t.co/gXod4JlpAi

4) I’m ashamed as a woman of Shaina NC’s disgusting tweet. I remember tweeting in her support when she was harassed by a BJP worker.

After a long silence, Shaina came back with an explanation…

Modesty of a woman shd be respected.Any act of indignity agnst women is highly looked down upon.Unlike congress,our gov will ensure justice

…which no one seemed to believe.

People are not stupid.

Even babies won’t believe in this statement! Dont be kidding yourself!

So hacker hacked your account only for that tweet?
No more tweets, no spamming, no DM leaks…

You can’t fool all the people all the time

How many times will politicians play this card?

Oldest trick in the book. Lame.

It’s appalling to see that the society is still trying to figure out ways to shame and blame the victim. We hope Varnika stays strong through all this and doesn’t back out because of such baseless rumours. We are definitely with her.