There can never be enough reasons to love SRK. Period.

There’s just one ‘King of Hearts’ and that is Shah Rukh Khan. Everything the man does is beautiful. Every word he utters is beautiful. The fact that none of the actors from the following generations have such a huge fan base and impact as him is proof that they don’t make men like him anymore!

On the way to @latrobeuni University.. Thank you for the kind gesture of offering a scholarship to a girl student from India for higher education and supporting the work at @meerfoundationofficial

As if the man hasn’t won us over already, a recent video has fans gushing over SRK, again. In his recent public appearance at the Indian Film Festival at Melbourne, SRK was seen dancing with a bunch of kids on the stage and boy was it fun to watch them! Khan, who was invited as the Chief Guest in the event and was awarded the ‘Excellence in Cinema’ award, surprised the kids on stage while they were performing on Apna Time Ayega. He then went on to dance with them, even twerking adorably in the middle, and hug them warmly towards the end. 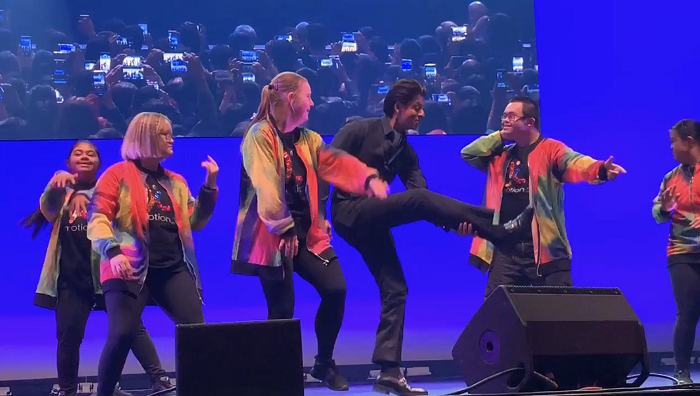 The kids, who have Down Syndrome, made a memory of a lifetime!

Bollywood superstar @iamsrk having a wonderful time dancing with the kids at @IFFMelb 2019 #PrabuTalkiespic.twitter.com/Y69IixVVeF

The wonderful kids get the warmest hug from SRK in Melbourne ❤️
The most loved superstar around the world. #IFFM #IFFM2019 @IFFMelb pic.twitter.com/qtlpq9ZEy0

If that wasn’t enough for the audience to cheer, he went on to show his evergreen steps while dancing to Chaiya Chaiya, and the entire auditorium roared!

Honestly, if I were present there, this would be the exact moment that I would faint:

When he gives you absolute nostalgia !! @iamsrk @IFFMelb #IFFM2019 pic.twitter.com/uZ6DRX15cl

It’s safe to say that once again, SRK has set the stage on fire!

Wow what a feeling for this special young girls on stage…!@iamsrk you are so heartfelt – for this feeling we love you so much around the world…

The best thing on Internet today 🕺😍

The only beautiful man on earth

I love this 😀 He is too cute and the kids are having much fun dancing with him …and vice versa also. Adorable! ❤❤

King Khan dancing with the special kids having Down syndrome is the best thing ever ❤️ The most humble superstar. He is honoured with 'The Excellence in Cinema' award at the IFFM 2019 😍 #IFFMHonoursSRK @IFFMelb
@iamsrk @toufiqali4srk @Shahebaz4Srk @princeparwej1 @RabiaSrkian pic.twitter.com/XkF1TjZB9T

This man can melt our hearts into a puddle!